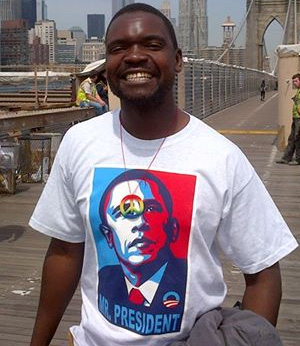 Formed in the dusty streets of one of Bulawayo’s oldest high density suburb, Njube, Umkhathi Theatre works, has stood the test of time and has established itself as one of the leading arts ensembles in the city.
The multi-award winning arts group recently celebrated its 17th anniversary and NewZimbabwe.com caught up with the group’s director Matesu Dube. He reflects on the journey they have traversed so far.
NewZimbabwe.com: What motivated you to establish uMkhathi Theatre Works?
Dube: Umkhathi Theatre Works was formed in 1997, in Njube Bulawayo. The founding members of the group were Matesu Dube, Maqhawe Moyo, Alexander Mhlanga, Richard Mahachi, Mthandazo Sithole (deceased), Tshoga Ndlovu and John Ndlovu.
What was the idea behind forming the group and what was the inspiration behind the name?
We formed the group as a way of creating employment for youths in our suburb. Some of the founding members had previously worked with another arts company, Young Warriors Theatre Company, which used to do its rehearsals in Njube. After the group folded, we decided to use the skills we had already acquired in the previous group by forming our own group.
The name umkhathi, was inspired by the mood and environment we were living in at that time. We were just idle youths with nothing to do.
Every new organisation or company goes through a teething process. How was it for you?
We faced so many problems, it was not easy for us but we forged ahead. We came out with innovative ideas of making money. At that time radio plays were very popular, we did many of those and in the process made money for the group. We also visited different schools in the city where we staged plays for the pupils.
We used that money to buy costumes for the group and finance some of our activities.
What do you specialise in?
Drama, theatre and traditional dances such as Isitshikitsha, Amantshomane, Amabhiza, Muchongoyo, Chinyambera, Jerusarema and Setapa, a Botswana traditional dance.
Many arts groups folded when the country’s economy collapsed. How did you manage to stay afloat?
When the economy collapsed, our group was greatly affected, we lost some members. Some left for the United Kingdom while others went to South Africa. We had foreseen such a situation by establishing a junior policy, so when some of the senior members left the group we promoted some of the junior members to fill the void.Advertisement

When did your major breakthrough come?
Our first breakthrough was our first ever performance outside the country when we performed at the Mitisong Festival in Botswana in 2001. Our major breakthrough came in 2004 when we were invited to perform at the Aberdeen Youth Festival in Scotland.
When we came back from Scotland, we were so much inspired and continued to improve our craft until we managed to create a name and a following for ourselves. We have also been privileged to tour many other countries and recently were in the United States of America.
How have you managed to keep the group together for all these years?
We have been fortunate that our group has not been affected by splits like other groups. There is only one incident when one of the founding members left to establish his own group. Otherwise we have remained united and focused as a group.
What has been some of your major challenges in the last seventeen years?
Finance has remained a major challenge for the group. We need money to fund our operations and keep the group going. We also have to cover administration costs like paying rent and other monthly bills. We are also in constant need of costumes for our various performances.
What have been your major achievements?
In 2000 we won a National Aids Council sponsored drama competition and went on to represent Zimbabwe at an Aids conference in Durban, South Africa. In 2011, we won the Chibuku Neshamwari provincial finals and came second in the national finals. In the same year we won our first National Arts Merit Awards (Nama) Outstanding Dance group award. Some of our members have in the past years been nominated in various award categories.
What can we expect from Umkhathi Theatre Works in the coming year and beyond?
In 2015, we are looking forward to working on a dance show. During our tour of the USA we learnt how to put together a dance show and we will definitely be working on one. We are also planning on putting together a theatre production.
What positive change do you want to see in the arts industry in 2015 and beyond?
I want performing arts to be taught in schools; and teachers should adopt a positive attitude towards this craft. We are always complaining about lack of sponsorship but if from a young age, pupils are introduced to arts it will be easy when one day they are heading big companies to sponsor arts programmes since they would understand what it is all about.
Arts must be given the same opportunity like football and other disciplines.