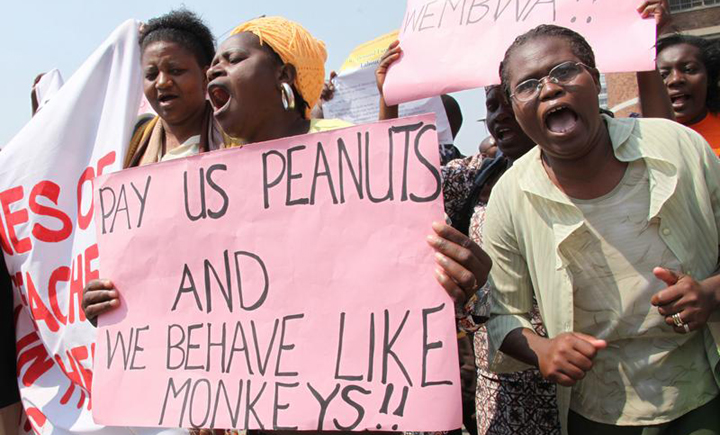 TEACHERS have demanded an immediate 100 percent salary increment and warned government that they will go on strike next term if their grievances are not met.

A trained teacher currently earns just above $400 a month before deductions.

Scores of Federation of Zimbabwe Educators’ Unions (FZEU) members staged a demonstration in Harare on Tuesday where a number of demands were made in a petition to the government.

The demonstrators had intended to hand the petition to the minister of state for presidential affairs Simbarashe Mumbengegwi but failed to meet him.

President Emmerson Mnangagwa’s administration is already battling to end a strike by junior doctors which has paralyzed operations at public hospitals around the country.

The medical practitioners have defied government appeals and threats, vowing not to return to work until demands over pay and working conditions are addressed.

For their part, teachers have warned that schools would not reopen next term if government does not resolve their grievances.

“Teachers have not had a salary increment since 2013 yet the cost of living has risen by up to 100 percent. This has been exacerbated by the cash crisis and three tier pricing system,” FZEU said in a statement this week.

“Thus, teachers demand an immediate 100 percent salary increase so that they get remuneration above the poverty datum line (PDL) currently pegged at US$534.

“Further, we are demanding 50 percent increment on transport and housing allowances with immediate effect.”

“Teachers are overworked due to the unilateral withdrawal of leave days by the employer. This has led to stress and burn-out among members,” he said.

“Teachers have been undervalued. In some areas, teachers are being harassed in communities where they are based. We want their protection.”

Ndlovu also challenged parliament to push for the alignment of the Public Service Act to the new constitution.

“Why are we still in a transitional stage 5 years after adopting a new constitution? This has been a concern,” he said.

“It means denying and delaying labour rights for civil servants. Their collective bargaining and freedom of association is also affected.

“We are therefore, warning the government to urgently look into the demands or else we are getting into a conflict as we go towards the second term in May. A strike is imminent.”

The government has yet to respond to their teachers demands and threat to go on strike when schools open next term.