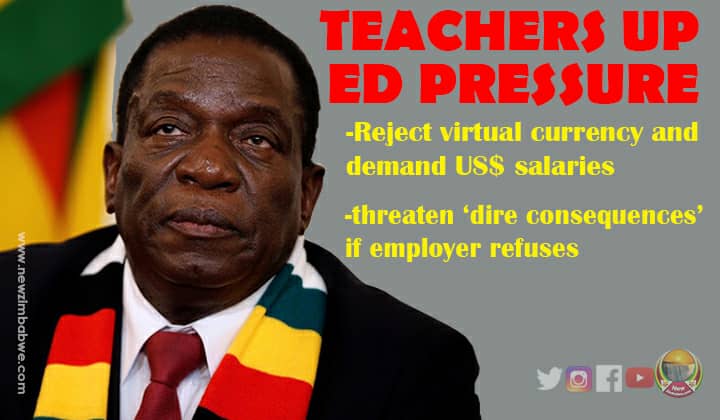 ZIMBABWE’s education sector could be plunged into chaos if a demand for salaries to be paid in hard currency is not met, a union normally pliant to the establishment has warned.

The government has yet to respond to the threat.

In a statement Friday, the Zimbabwe Teachers Union (Zimta) said its members had been reduced to paupers by government’s recent monetary policy measures that include a 2% transactional tax across the board that has triggered a near economic meltdown.

“In light of the prevailing economic situation in the country where service providers are demanding payments in foreign currency, we as teachers in Zimbabwe being the largest section of civil servants hereby demand to be paid our salaries in foreign currency forthwith.

“Having observed that we have been hardest hit by the recent monetary pronouncements and we are no longer in a position to meet our daily … commitments,” Zimta spokesperson Nganunu Sibanda said in the statement.

Zimta warned that failure by authorities to meet the demand would have dire consequences for the country’s education sector.

“Failure to meet the demand will definitely result in unforeseen consequences for the teaching fraternity.

“Our demands are informed by the fact that ….our salaries can no longer sustain our existence as teachers. The current salaries which are low and distorted have driven teachers into poverty and incapacitation,” the union said.

According to the union, teachers have continued to wallow in penury, getting salaries below the poverty datum line.

The new fiscal and monetary regime announced by the government has triggered a run-on basic commodities, chaos on the informal currency market, fuel shortages and general price distortions leaving the of economy tittering on the brink of implosion.

Government says the tough measures are necessary to set on the recovery course an economy in crisis for almost two decades.

An out of control budget deficit blamed on runaway government expenditure appears to be the immediate target of new finance minister Mthuli Ncube who recently introduced a widely condemned new tax on electronic transactions, now the main form of payment in the country.

The minister is also trying to negotiate a debt arrears scheme with international creditors whom Zimbabwe owes more than $11 billion, about 80 percent of gross domestic product (GDP).