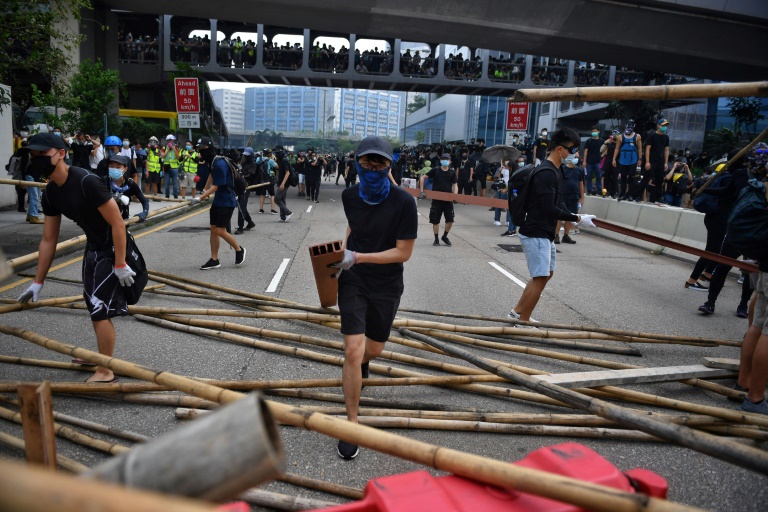 Hong Kong riot cops fired tear gas and baton-charged protesters who retaliated with a barrage of stones, bottles and bamboo poles on Saturday, as a standoff in a working-class neighbourhood descended into violence, breaking an uneasy peace that had lasted several days.

Earlier thousands of demonstrators, many wearing hard hats and gas masks, marched through the industrial Kwun Tong area, where they were blocked by dozens of riot police with shields and batons outside a police station.

Frontline protesters  known as “braves”  pulled together a barricade of traffic barriers and bamboo construction poles. As the afternoon wore on some fired stones from slingshots, prompting a charge from police, wielding batons and pepper spray.

Several of the black-clad protesters were detained as officers swept through.

Hong Kong’s police force have become the target of the protesters’ ire for their perceived heavy-handed response to the months of demonstrations.

Antipathy has soared towards the police, who have used baton charges, rubber bullets and tear gas against hardcore protesters, but are also accused of beating peaceful demonstrators.

The city had appeared to have pulled back from a nosedive into violence, with the last serious clashes taking place a week and a half ago just after the city’s airport was paralysed by demonstrators.

But tension rippled across Saturday’s march, where a number of frontline radical demonstrators known as “braves” had gathered.

“I understand being peaceful will not solve the problem,” 19-year-old student protester Ryan told AFP, giving one name.

“The government won’t respond to peaceful protest. If I am arrested it is because I come out to speak for justice.”

Police chased hundreds of protesters, holding a line underneath a bridge but threatening a new charge.

“I’ve never seen Hong Kong in such a situation,” 65-year-old Dee Cheung told AFP earlier, before explaining why he joined the protests.

“The youngsters who come out have put their future at stake… they are doing this for Hong Kong.

“There might be some things we don’t agree with, like the ‘braves’ who tend to charge. But let’s think about why they do that?”

Protests started against a proposed law that would have allowed extradition to China, but have bled into wider calls for democracy and police accountability in the semi-autonomous city.