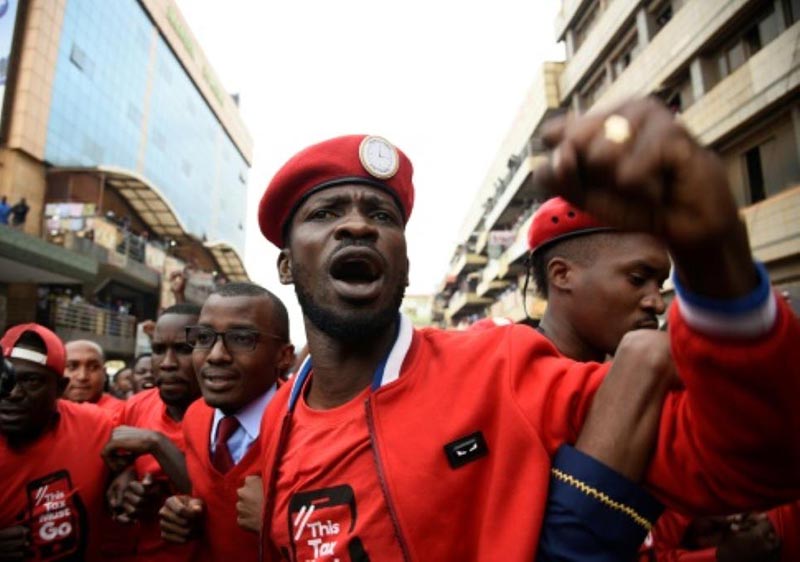 Ugandan police and soldiers closed off parts of Kampala for several hours on Monday and fired teargas and shots into the air to break up protests over the arrest of a prominent opposition lawmaker.

Popstar-turned-politician Bobi Wine was one of five MPs arrested on August 13 on the eve of a parliamentary by-election in the northwest town of Arua after President Yoweri Museveni’s convoy was pelted with stones by their supporters, according to authorities.

The arrest of the popular MP — a vocal critic of the long-serving president — has angered many in Uganda, and protests erupted in the capital on Monday over his ongoing detention.

“Having all those police and army shooting teargas and bullets and using batons against us shows you that the govenment is really scared of Bobi Wine,” said Henry Kinaro, 28, a secondhand shoe seller.

“The soldiers chose people randomly whether you supported the protest or not and they beat them.”

Demonstrators in central Kampala set fire to piles of tyres and wooden pallets, blocking traffic, and lobbed stones at policemen while supporters cheered their encouragement from shopping arcade balconies, an AFP reporter witnessed.

Heavily-armed police in anti-riot gear and soldiers took control of the streets around the bustling Kireka market.

Armoured personnel carriers were positioned at key intersections as security forces ordered members of the public to evacuate city blocks.

Hundreds of market traders and passers-by winced in fear as they were ordered to walk in single file with their hands raised by baton-wielding soldiers.

On Nasser Road — a hub for printers and stationers — soldiers forced hundreds of people to kneel in the street with their hands up while they patrolled the area.

Amid chaotic scenes members of the public used scarfs and tee-shirts to shield their eyes and mouths from the clouds of teargas and black smoke that hung in the narrow streets between shopping arcades while shopkeepers rushed to seal their doors.

Reuters photographer James Akena said he was detained for several hours after being beaten by soldiers.

“I was just standing holding my camera near to the protest. Suddenly there were many soldiers hitting me. I have some bruises and my hand is swollen. They still have my camera and I don’t know when I’ll get it back,” he said.

Lawyers and family members say that Wine, whose real name is Robert Kyagulanyi, is in urgent need of medical attention after being beaten by security forces during his arrest.

But in a weekend statement, Museveni, 74, said this was “fake news” and accused the MP of forming “indisciplined groups” and intimidating ruling party voters in what he said was “terrorism”.