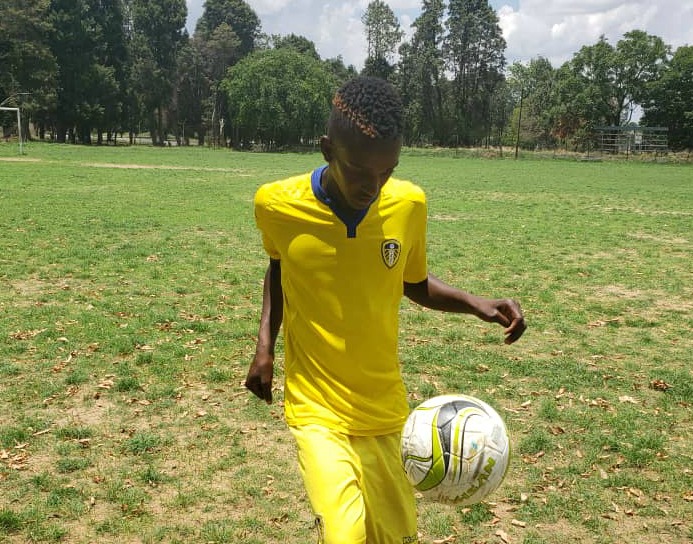 TOTAL Football Academy teenage prodigy Munashe Pini is making waves in the ZIFA Harare Province Division 2B after a brilliant run of form for the Warren Park-based star which could be soon attracting the attention of some of the country’s biggest professional clubs.

The 17 year-old striker, who is a form three student at Mufakose High 2 in Harare, has so far scored an incredible 15 goals in just 12 games for the Justin Kabetha-coached Total Football Academy side, who are in their maiden season in ZIFA Harare Province Division 2B.

“As newcomers in the ZIFA Harare Province Division 2, our team has been struggling a bit to catch up with other teams but the good thing is that we are rated the best team when it comes scoring,” Pini said in an interview with NewZimbabwe.com.

“I have scored 15 goals in 12 games so far this season and my target at the end of the season is to score more goals than those scored in the upper divisions,” he said.

A keen footballer from a very tender age, Pini, like most kids in Zimbabwe, got his early introduction of the game through playing street football with his peers.

However, it was at the age of 10 that he first got involved in age-group football after joining the CAPS United juniors, where he would go on to win his first individual accolades.

“When the CAPS United juniors project died the first team that came in my mind was Total football Academy and that’s where I still am right now. I have learnt a lot during my time at the academy because the coach had so much faith in me even when I was still very young and I managed to get exposure from all the age groups, from Under-14 right up to Under 18. I also even got exposure to feature for the academy when we were still in Division 3 which was very important for my development,” Pini says.

Prior his to his exploits in the ZIFA Harare Province Division 2B, Pini was the top scorer in the Harare Province Junior Football League last year with 14 goals. He also qualified to play in Under-16 age group where he scored a further seven goals but the coaching staff at Total Football Academy used him mainly in Under-18s.

The rising young star is set to join the growing list of talented young players who have come through the ranks at Total Football Academy before making an impact in Zimbabwean football.

Total Football Academy which is based at Warren Park Primary School is a soccer development and non-profit making organisation set to expose untapped talent throughout Zimbabwe.

The Academy was founded in Harare on 24 August 2011 by a group of six close friends with a strong vision and passion for soccer.

The main vision behind the formation of the academy was to play a part in the development of junior football in Zimbabwe and in the process benefit the community by sensitising the youths on the fight against HIV/AIDS pandemic and drug abuse.

The continued sprouting of football academies across the country has brought hope for the development of soccer at grassroots level since most of the local clubs have abandoned the junior policy.

Some of the Premier Soccer League teams which used to have a vibrant junior policy having abandoned the noble project in search of ready-made products, leaving soccer academies to step in to develop soccer at grass roots level.