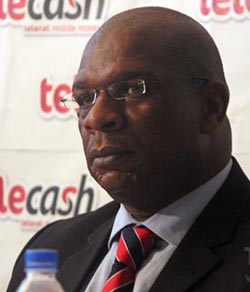 TELECOMS company, Telecel, on Thursday said the number of Telecash agents and merchants countrywide has increased by a thousand from 1,600 to 2,600 since the mobile money transfer service was launched in January.
Telecash has also signed agreements with two insurance companies and a medical aid society for the payment of premiums and subscriptions through Telecash.
The company is Zimbabwe’s second largest mobile telecommunication company after Econet Wireless with nearly three million subscribers.
Telecash allows subscribers to use their cell phone as an electronic wallet to transfer money, pay  for airtime, buy groceries, pay  bills and pay for other goods and services.
OK Bazaars, Bon Marche, TM Supermarkets, and Zimpost are among the major retail outlets with branches nationwide that are Telecash agents.
In addition, there are a host of other retail chains and sole traders all over the country that are Telecash agents or merchants.
Medical aid society, Cimas is now accepting Telecash as a means of payment along with Eagle Insurance and First Mutual Life, which also operates a medical savings fund.
The Telecash agreements with Cimas, Eagle Insurance and First Mutual Life follow deals signed with the City of Harare and Multichoice for the payment of municipal bills and DSTV subscriptions.
“We launched Telecash with just over 1,600 agents and merchants. It is pleasing to see that within just over a month the number of agents and merchants have increased by a further thousand,” commented Telecel mobile financial services director Nkosinathi Ncube.
“We expect the number of agents and merchants to continue to grow,” he added.Advertisement