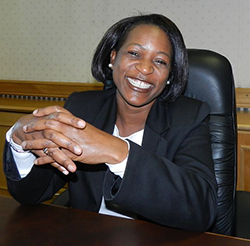 TELECEL Zimbabwe, which is currently embroiled in a legal battle with government over the cancellation of its operating licence, says it has started negotiations with the government to resolve the impasse, an indication that it could get its licence back.
In April government cancelled the company’s licence saying it had failed to comply with local ownership regulations despite constant warnings and reminders.
Government also said Telecel had violated its licence renewal fee payment plan with the telecommunications regulator, a charge the firm has vehemently refuted, maintaining that it was up to date with its payment plan after it agreed to pay the $137,5 million over an extended period.
In May the firm got a temporary reprieve to continue operating after the High Court suspended the cancellation of its licence pending finalisation of its legal fight with the government.
The company’s new chief executive, Angeline Vere told journalists on Tuesday evening that the company remained committed to working with the government to meet all the licence requirements.
“I am glad to advise that very amicable discussions are ongoing with the government to ensure that the licencing issue is resolved,” she said, without giving details.
Vere said the company, which paid a $5 million instalment for June, was preparing for the next payment due in December this year.
In terms of that agreement, Telecel was supposed to pay a commitment fee of $14 million upon signing the deal, with the balance being cleared over a period of seven years.
However, when the licence was cancelled, government insisted that the company had paid $8 million and took 19 months to pay the outstanding $6 million.
Meanwhile, Vere said the company was feeling the pinch of the economic challenges facing the country which, compounded by a 35 percent voice tariff cut by government at the beginning of the year, had necessitated cost cutting measures.
“Of late the industry has been affected as more and more people are finding it very difficult to maintain their communications budget,” she said.
“The situation has been further compounded by the emergence of and rapidly increasing over the top communications solutions such as Whatsapp, Viber and Facebook.”
She said the company was increasing its distribution and infrastructure network by rolling out additional kiosks and signing up new dealers as well as optimising its network and targeting key sites.Advertisement

Vere said Telecel had been exploring human resources cost cutting measures.
“We are happy to advise that Telecel as of today has not reduced any staff salaries but, like all organisations in this tough operating environment, it is constantly looking for available ways to optimize costs,” she said.
Telecel is Zimbabwe’s third biggest mobile operator with 2,4 million subscribers.
Amsterdam-headquartered communications firm VimpelCom owns 60 percent of the firm, with the remaining 40 percent being controlled by Empowerment Corporation (EC), a local consortium.