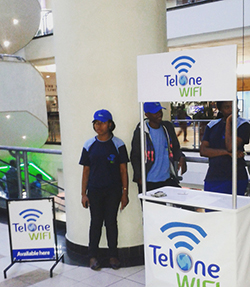 THE institution of government in Zimbabwe has evolved [devolved?] over the years from a sacred duty to represent the people, protect them from abuses and to provide a good climate so that every citizen has an equal opportunity to succeed to that diametrically opposed to the people in leads.
The government is in a foray to burden its citizens through an unending wave of debt assumptions. These proposed debt assumptions rob all and sundry of hard earned money to fund loyalty driven institutions whose strategic importances are questionable. The agenda reeks of citizen abuse. The government is in another delinquent and mischievous season of extorting taxpayers by proposing yet another debt assumption, this time that of Tel-One.
Government has become an industry of its own, a massive money collecting machine, using its coercive power of taxation to reap from its populace to finance crony capitalist run corporates, hangers-on and idealistic individuals who still hold out hope that there will be a turnaround of a state enterprise, a hope that flies in the face of overwhelming evidence that it doesn’t.
Turnaround and strategic success pinned on burdening the taxpayer is just political expediency devoid of economic sense. The board and management of Tel-One should never aim to earn bragging rights of masterminding a turnaround, if it’s one to be financed by the majority who are actually not their clients.
A board that crafts a turnaround strategy with a government debt assumption as its major strategic imperative is incompetent. There is not even the decency by the board to pay termination costs due and payable to other networks thus attempting to be financed by all and sundry.
The board and management should rather invest in devising a better business model and invest in corporate restructuring. The solution to technical and actual insolvency should not be depended on viewing the present and future generation as piggy banks that finance the sins of past strategic failures.
The reward for these regurgitated boards and management is sinecure! That is obtaining positions requiring little or no work but giving the holder status, power and/or financial benefit. This must be resisted at every turn.
Members of Parliament must not promote the idea that government money originates from some faceless entities or people who have no feelings. These debts will eventually have to be paid from tax obtained from the labour, sweat and innovation of actual people.Advertisement

The Board and management of Tel-One must take time to study and learn from the likes of Dairibord on how they masterminded turnarounds of their entity from the grip of technical insolvency rather than investing time in lobby activities to force march the nation into more debt.
The board and management should rather invest its apparent lobby strengths in advocating for corporate restructuring which will offer its present debtors hybrid financial instruments as well as allowing private partners’ latitude to control some of the strategic pillars. They should advocate for more private public partnerships. At best they should privatize like in the Malawi Telecom scenario. If the board has faith in the present strategic direction it follows the legacy debts will be payable in time.
We should resist the notion that present and future clients of Tel-One shall obtain better service riding on the financial benevolence of citizens through an increase on the national debt burden and taxes. If we fail through our MPs to resist this latest attempt at debt assumption the season of madness will continue with all the moribund state enterprises lining up to force-march us into financing them.
Money is private property for which state enterprises must not gain from citizens without limitation and without reason. Money should not be subject to unjustified expropriation by the state through tax and debt burden. The existence of private property is the antithesis of every centralized, statist political philosophy. There is no reasonable justification to expropriate citizens’ money to finance an insolvent company.
One of the things that I have learned over my few years in research is: state institutions are what they are. By that, I mean it is almost impossible to change their philosophy in the short-medium term. It takes a lot of energy to modify their core and even more to sustain that change. The present philosophy is that government owes them money at every turn.
The country should invest in resisting this credo of state enterprises of craving other people’s money. If the Members of Parliament accept this new wave of debt assumption it will only will lead to more debt assumptions. In future any moment of corporate stress, crisis or challenge, shall lead to more howls of debt assumption using the present Tel-One overtures as precedent.
Honorable members of Parliament must be urged to be responsible enough to stop the latest craze of debt assumptions. If the MPs desist from thinking within paradigm of party dictates but instead become fair, robust and impartial to Zimbabweans the country may claim a new narrative in corporate governance.
Brian Sedze is Chairman of Africa Innovation Hub and a strategy consultant. He can be contacted on brian.sedze@gmail.com