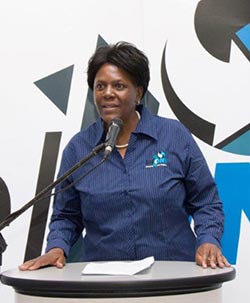 STATE-OWNED fixed line operator TelOne slipped to a $35 million loss in 2016 after income from its voice service dropped by a quarter, documents have shown.
The telco, seen as one of the more stable parastatals, sank into the red from a $10 million profit recorded in 2015 after interest on legacy debt rose 860 percent due to exchange rate movements.  Interest costs from legacy loans chewed $18 million and TelOne has requested government to warehouse the debt to give it a fresh start.
TelOne was established as a separate entity after the unbundling of the then Postal and Telecommunications Corporation (PTC) in 2000 and inherited a legacy debt of $360 million which has haunted it ever since.
Overall revenue for the full year to December 31 fell by 23, 7 percent from $148,1 million in the previous year to $119,6 million. Income from voice declined by 26 percent from $106,8 million to $79,04 million while broadband revenue rose by 13,6 percent to $34,8 million.
“Revenue from voice has been reducing in line with global trends from 81 percent in 2013 to 66 percent in 2016,” Telone said in documents seen by The Source.
Operating costs increased by 2, 4 percent from $128, 7 million in the previous year to $131,7 million.
The parastatal made an operating loss of $13 million from an operating profit of $8 million in the previous year on the back of an increase in costs, in particular depreciation.
A revaluation of assets that was concluded in December 2015 increased its asset value by $88 million. It nearly doubled its capital expenditure to $25 million.
It owes its creditors a total of $116,5 million and its top creditors include POTRAZ, CAI Pension fund and Econet who are owed $32,9 million, 23,5 million and $16,1 million respectively.
ZIMRA is owed a total of $8, 48 million for tax obligations and interest on the arrears. The tax agency has garnished the parastatal over the debt previously.
Telone said it failed to pay $1, 5 million due to local creditors because of subdued collections in the period and is facing problems in making foreign payments due to depleting nostro accounts.
“International creditors with a negative variance of $7,1 million were not paid due to the non-availability of Nostro funding, the company is now setting aside funds for the payment of these creditors awaiting Nostro funding”, said Telone.Advertisement

Telone is owed a total of $271,5 million by various debtors , including among others – corporates, government, parastatals and local authorities which owe $94,5 million, $48,2 million,  $36,2 million and $4,5 million respectively.