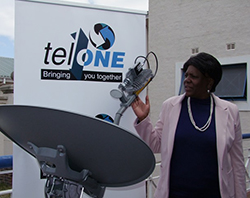 BULAWAYO:  State-owned fixed line operator, TelOne expects to recover $165 million in debts this year after collecting $123 million last year, an official said on Monday.
The parastatal, which is owed $271 million by various players across the economy, including the government, said in 2016 it managed to collect $123 million after an aggressive debt collection strategy.
“TelOne is currently owed $271 million by debtors who include government, corporates and residential clients. The company was able to collect $123 million in 2016 and is targeting to collect $165 million in 2017,” said Melody Harry, the company’s corporate communications manager.
In 2015, the company recovered $190 million.
As of 2016, companies owed TelOne $92 million, private homes $83 million, the government $41 million, parastatals $36 million and local authorities $10,6 million.
TelOne’s debts amounted to $129 million to various suppliers.
Harry revealed that the company was negatively affected by the operating environment challenges which saw a decline in its revenues.
She said the company has a total broadband capacity of 105 000 ADSL and fibre to the Home combined and this is targeted to grow by 100 percent in 2017.Advertisement