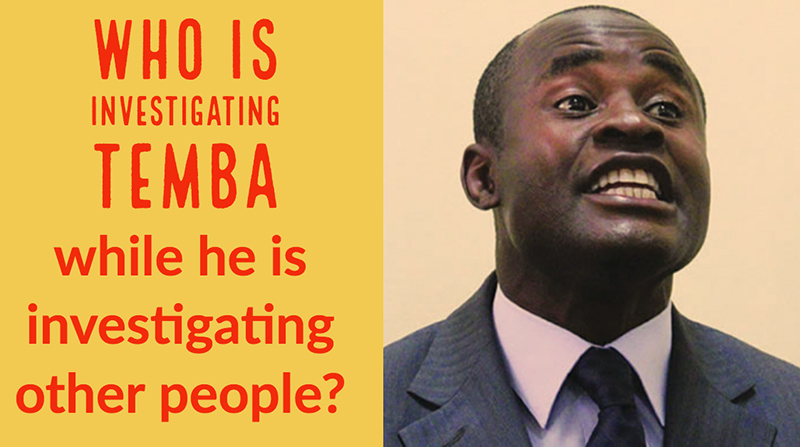 INDEPENDENT Norton legislator Temba Mliswa likely merits a claim to being MP of the moment for his apparently daring and dogged buccaneering against corruption, principally the search for answers regarding the country’s missing diamond riches.

The legislative committee he chairs has summoned ministers former and still-serving in its quest for answers. To top it off, former president Robert Mugabe no less, is set to be interrogated by the committee over the diamond scandal next month.

And yet questions are being asked, not of the investigation itself but its agency. How does “tainted” Temba become the country’s corruption fighter-in-chief?

His critics suggest the equivalent of the devil suddenly doing God’s work. What would be the motivation? And what of the devil’s own commissions; who investigates that?

Indeed, the committee chair appears to have a chequered past. Among “hundreds of perfidious allegations”, Mliswa has been accused of trying to force a businessman to pay him $165m in consultancy fees for helping link the tycoon up with local politicians. Mliswa denied the charge.

Particularly telling too, was the horrendous claimed ordeal of British couple Paul and Brenda-Lee Westwood when Mliswa was still a Zanu PF MP and the ruling party’s chairman for Mashonaland West province.

The couple, in appeals to President Emmerson Mnangagwa and, before him, predecessor Robert Mugabe, accuse Mliswa of grabbing their companies – Noshio Motors and Benbar – which were then worth over a million US dollars.

“What happened to me Mr President, was wrong, immoral, illegal, fraudulent, un-constitutional, against the law, a gross violation of my human and property rights,” writes Paul Westwood in a recent petition to Mnangagwa.

Westwood adds; “Hon T. P. Mliswa must be held accountable for his own actions and decisions in this heinous crime.

“I humbly ask and pray for your intervention in order for my family and I to rightfully receive the compensation due to us from … Hon T. P. Mliswa who was provincial chairman of Mashonaland West in the ruling Zanu PF party at the time he illegally seized my companies Noshio Motors and Benbar.

“Benbar was Zimbabwe’s Number One Choice in manufacturing and Noshìo Motors was the leading supplier of motor vehicles and accessories to the entire nation. Hon Mliswa destroyed it overnight.”

Ordinarily though, every effort to combat the pervasive scourge of corruption would be welcome, especially as, among other things, sleaze adversely impacts economic growth, deters foreign investment and undermines trust in government.

Indeed, while greed-inspired perfidy is nothing new in Zimbabwe, the scale of the rot in recent years has been stupefying, especially in the diamond mining sector.

Back in 2016, then president Mugabe sensationally revealed that diamonds worth more than $15 billion had been looted in the Marange mining area. Curiously however, there wasn’t a serious attempt by the authorities to thoroughly investigate Mugabe’s shock allegations.

Mliswa and his committee have now decided to wreck the muck anew, and the revelations have been quite dazzling. It turns out that the police had a diamond mining concession at Marange about which only the commissioner general was fully in the know; the CIO spy agency was also running an operation of its own.

Even so, many are asking questions of Mliswa and whether he’s the right person to be leading the committee’s investigations.

Who is investigating Temba?

“Can he address his own corruption scandals and his numerous arrests for instigating violence and using youths to do his dirty work.

“This ‘whistleblowing’ mission that he is on seems to be fuelled by spite and hatred. He is pulling the veil over voters’ eyes, pretending to be honest and sincere.

“He takes pride in ‘ruffling feathers’ for personal gain. His exposes are very selective and not patriotic in any way.”

The legislator has also been accused of using the facilities of his being an MP to target certain individuals for personal reasons.

“Temba Mliswa appears to have a vested interest in certain individuals that he is targeting,” said one political commentator.

“I find it interesting that a person who was fingered in a number of corruption scandals is now the self-prophesied ‘Voice of Anti-Corruption’.

“Is this not the same Themba Mliswa who tried to force a businessman to pay him at least $165 million as ‘consultancy fees’ in shady demands, for linking him up with politicians?

“Temba is a shameless, opportunistic parasite who preys on successful businessmen for personal gain, and when his demands are not met, he then launches a smear campaign against the respective persons.”

A weekend report in the State media claimed that Mliswa was also one of a number of legislators on the payroll of telecoms tycoon James Makamba.

“Why would I pursue a personal score? I have never been in diamond mining myself,” he recently told NewZimbabwe.com. “I don’t own a mine first of all. I have never done a tender; the only thing I have is my farm, the tobacco business which I have.

“It’s just my desire to see the country forward and to get office bearers to account. They must be able to do the right thing.”

He added; “It’s my mandate from the people to make sure that I represent them effectively. That is what you call effective representation, nothing more nothing less.