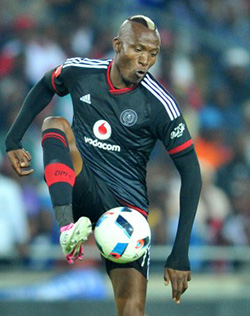 SOUTN Africa: Orlando Pirates striker Tendai Ndoro has conceded it would be unthinkable if the club were unable to celebrate their 80th anniversary in style this year.
The Buccaneers have already missed out on the MTN8 and Telkom Knockout titles this season, losing in the quarter-finals and semi-finals respectively, leaving them with just the Absa Premiership and Nedbank Cup to contest.
Pirates, who also lost to SuperSport United in the 2016 Nedbank Cup final, begin this year’s Ke Yona adventure against Eastern Cape-based side EC Bees in March, but first continue their league pursuit at Platinum Stars next Wednesday.
Ndoro says his team are hungry to fight for both remaining domestic titles in order to celebrate the club’s 80th anniversary in the best way possible.
“The pressure is always there but [Orlando Pirates’ players] try to control it”, said Ndoro. “But in football, whether Pirates or another team, every team wants to put something in the [trophy] cabinet.
“As a big team, we celebrate our 80th anniversary this year and we must celebrate and hopefully win the Nedbank Cup and the league,” he added.
The Zimbabwe international has scored 13 goals in all competition for Pirates this season but preferred to share accolades together with his team-mates.
“The important thing we win games as a team. We have got the league and Nedbank Cup to play for, that’s what we want now. As an individual I can’t do it alone, I play with other players, it’s about teamwork, not only me,” he concluded.