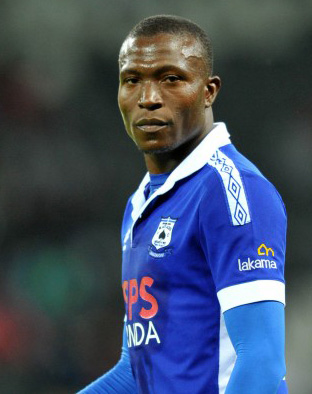 MPUMALANGA Black Aces coach Clive Barker has finally confirmed that Zimbabwe international striker Tendai Ndoro could be joining Orlando Pirates at the end of this season.
The former Chicken Inn star has been linked with cash rich Mamelodi Sundowns, but Pirates have emerged as leaders in the race, according to Barker.
Ndoro has been in fine form for AmaZayoni since joining in 2013, netting 16 goals last term while this time around he has six to his name in 19 league appearances.
“Tendai is very, very good and he’s scored a lot of goals for us since arriving and was our leading goal scorer last season,” said Barker.
“He’s a few goals behind the league’s top goal scorer this year, and I just think that all round he’s a brilliant player.
“Obviously we’re being approached and he will be leaving for a bigger club soon. I think at the moment Pirates are the front runners, and maybe Sundowns.
“It will be a hell of a blow to lose him of course because of the player he is. He’s a goal scorer and a good player all round.”
Ndoro’s agent Karabo Mathang of P Management has close links with Pirates and manages three of their players who are loan to Bucs, making Irvin Khoza’s side a definite next stop for the striker.Advertisement