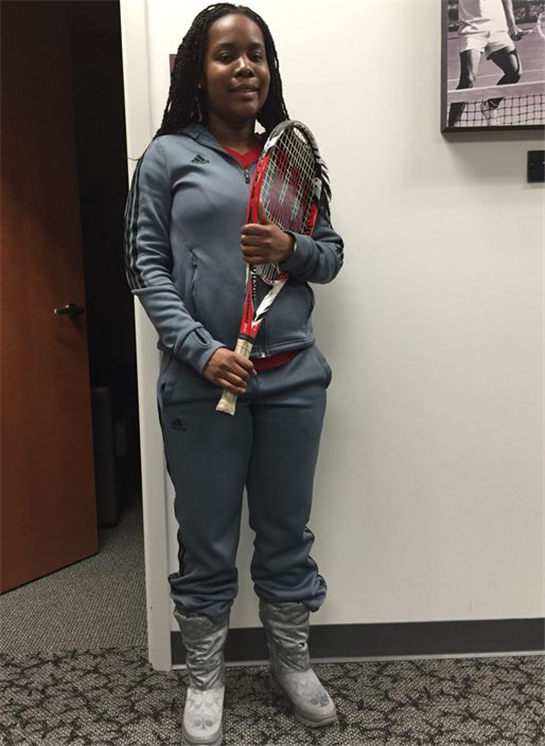 TANYA Gombera isn’t fazed by being the youngest head coach of any Division in sport at Northern Illinios University (NIU) in the United States.
Gombera was hired in August as the ninth head coach in the history of the women’s tennis program.
She replaced Ryun Ferrell, who resigned over the summer after eight years at NIU. Under Gombera’s guidance the Huskies are off to a 3-0 start in their spring season and have big plans in store.
“It’s been a great transition for me being here,” Gombera said. “It’s really a family environment here. I’ve made good friends with most of the coaches, and they’ve been very helpful.
“The girls work hard. I’ve been lucky to inherit a great team of good individuals that work hard, and they want to get better.”
Gombera can relate well to the student-athletes she coaches: She’s only a handful of years older than most of the Huskies, she has knowledge of the ins and outs of the Mid-American Conference (MAC) and she knows what it’s like to uproot oneself from his or her home country in hopes of a brighter future.
Climbing the coaching ladder
At 26, Gombera is only a few years removed from her playing career with the Akron Zips. Her time since graduating in 2009 has been filled with coaching jobs where she gets to spend her days immersed in the sport she grew up loving in Zimbabwe.
Gombera most recently served as an assistant coach for the men’s and women’s tennis teams at the University of North Dakota, overseeing the newly formed men’s tennis program in her two years there.
“I guess I’m very competitive in nature,” Gombera said.
“I’ve always wanted to be successful. I expect great things from myself no matter how old I am. Hopefully when I’m 80 or something I still have the same goals.”
While the age difference between Gombera and her players is small, there’s a mutual respect between her and the student-athletes in the traditional coach-player relationship. They all call her “coach,” which she said she prefers.
“To me, a coach is a coach,” said senior Nelle Youel. “I just have that respect there no matter who it is. I know that she’s just out to support me and help me do what I can to help the team.”
No stranger to MACtion
Gombera knows what it takes to succeed in the MAC, having played tennis at the University of Akron. She was a four-year letter-winner and became the fifth player in program history and first since 2004 to earn All-MAC Second Team honours, which she picked up in 2008 as a junior.Advertisement

She considers her knowledge of and experience in the MAC to be one of the advantages she brings to the head coaching position.
“I know what it takes to be successful in this conference just having played in this conference,” Gombera said. “That’s something I try to instil in the girls and the team.”
Gombera said the Huskies’ main goal this year is to improve upon last season’s 7-12 record. They’ve started out on the right foot, opening the season 3-0.
The team’s other main goal is to make it to the MAC Tournament and to leave “more of an impression in the conference,” Youel said. She said it’s imperative the team takes the season one match at a time.
“We know that each match is going to be a grind, and we have to have that same focus every match,” Youel said. “I think [Gombera] does a good job of keeping us with that mentality throughout the team.”
Cross-continent hit
Gombera was an accomplished player in her own right before she came to the United States to play in college.
But, it would take more than just skill and accomplishments for Gombera to make the jump to the United States and further her career. She needed a bit of luck.
“My best friend at the time was actually getting recruited at Akron, and I was in the [recruiting agency’s] video,” Gombera said. “So, the coach at the time he was like, ‘I’ll take you and the girl that you’re playing with.’”
Gombera said Akron gave her the best four years of her life because in the United States “there’s just so many opportunities for everybody to be successful. That’s different being back home.”
That search for success in the United States is something that’s represented amongst the women’s tennis roster. Among the 10 players, five hail from outside America.
While Gombera has what she sees as a bright future in front of her, the feats she’s already accomplished were recognized when she returned home to Zimbabwe for a visit two years ago.
“I think it’s a sense of pride just because I’ve done so well in my career,” Gombera said. “People look up to me — other Zimbabweans — which I feel like I’m more of a role model.”
Accomplishments in Zimbabwe
• Gombera earned a silver medal at the 2003 All-Africa Games in Nigeria.
• She represented Zimbabwe in the Afro-Asia Games, the Africa Junior Championships and Zimbabwe Schools Team.
• She competed in numerous International Tennis Federation events and rose as high as 453rd in the world rankings.