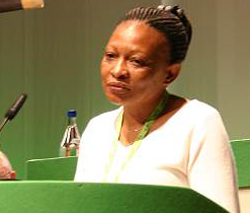 Dear Editor
I AM writing you in response to the story in your paper titled Stripping Thabitha: Zimbabwe’s Bad Girl Legislator. First of all let me thank you for covering this story on your paper. I have to point out that I am one of your readers and I think in most cases your reporting has not been biased but in this account you probably missed the point.
I would like to thank Honourable Thabitha Khumalo for being a representative of the voiceless and the down trodden. It is regrettable that an issue that is at the core of humanity like this one is being trivialized and given bad publicity. I probably did not get the analogy right but I do not think fighting for humanity is anywhere comparable to the game of soccer. I was offended by this insinuation here, “…But if anyone was not yet convinced about her bad girl tag, maybe Thursday’s oddball top stripping antics by the legislator in the city would do”. How dare you?
It is taboo in our culture for women to come out topless and the Honourable knew this before she took that top off. The question is why? How on earth a lady in her position would be willing to carry that label if the issue was so trivial? Just in case you missed the point, Honourable Khumalo is sending a strong message here; the message is to all – very loud and clear. There is alarming lawlessness and lack of RESPECT plaguing the country. I think she should be applauded for taking a stand against this thuggish culture that has taken root in our everyday lives, unabated.
Not too long ago there was a young lady in Harare who was stripped by thugs for wearing an outfit that was presumed provocative. Do we need the public’s fashion opinion before we go out of our houses? Some vilified the young lady for wearing whatever she was wearing in public; who knows what she could afford or could not? An arrest came way after the incident; and thanks to people who complained on the poor girl’s behalf. Is this country ruled by thugs or elected officials?
Why is this happening; where there are laws? Imagine that being your child mugged for what she thought she could wear. That girl will never see life the same way in a country that has laws. The thugs who stripped an activist on her way to a Njube rally were never charged, were they? We have two known cases of forcibly stripping women out of their clothing and the question is why? Isn’t this done to humiliate?  It looks like there is a trend here and the vulnerable are being targeted. The honourable MP speaks up and she gets labelled. Are we saying these are/were isolated incidents? How many cases of this nature are/were not reported?Advertisement

Honourable Khumalo is putting her dignity on the line for you and me; for girls, mothers, women and humanity. She might lose her position as a legislator if people were to construe the message as was the case in your paper. I would like to state that I am in support of her stand and am glad someone is speaking up for the voiceless. This is no laughing matter and I am afraid if there is a man or woman who is laughing at this matter and labels Honourable Khumalo, he or she really does not understand humanity.
She is challenging men, but I think she needs to challenge all – that is men and women into this fight. More women should follow her example. We have a culture of letting women down, but we all know that for every successful man there is a strong woman behind. It does not matter who that woman is; be it a mother, wife, sister, aunt or grandmother – it is still a woman. How ironic that we say Mbuya Nehanda here and there, but forget that she was a woman. Does anyone respect the fact that she was a woman? Any man who abuses a woman does not have respect for women in their life. Isn’t it a biological fact that we were conceived of a woman?
Before we attack the messenger in Honourable Khumalo we need to see that there is a problem and nothing is being done. Instead of character assassination we should look closely into the matter and address the issue. Every year WOZA representatives are jailed by men with wives and daughters at home. Young girls are married off to some man because the man can pay the girl’s parents.
The girl is going to continue being abused and in some cases from both sides. The abusive man and her parents will both abuse the girl child because the person causing her harm paid some money? Here I am talking about statutory rape cases that turn into early marriages.
Mothers, as women, are caught in between and will not stand up for their children or else they will be abused too. It sounds like fiction but this is happening and nobody says a thing. Now we have a strong woman to get us out of this yoke, we denigrate her and call her names. What a shame?