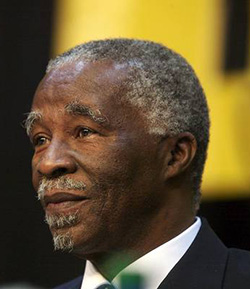 THE appointment of former South African president Thabo Mbeki as Chancellor of one of the country’s largest tertiary institutions, the University of South Africa (UNISA), comes at a unique moment in the country.
Universities are struggling to cope with student movements’ revolutionary demands for relevant, decolonised and free education. In his inaugural speech, Mbeki raised a number of issues, two of which I’d like to analyse here. He explored the idea of “the university” and its role, and also outlined his understanding of the role that knowledge plays in society.
The speech stretched far back into Africa’s history. It also looked ahead to how universities might free themselves of racism, tribalism, regionalism, sexism, patriarchy and xenophobia. This is a mammoth task which calls for what Mbeki described as “a rebirth”.
The million dollar question is whether South Africa’s current intellectuals and academia are up to the task?
What universities should be
Mbeki drew on several sources to explain his views on what a university should be.
The first was a document drafted during his presidency. It was complied by a working group he convened, and dealt with the biggest issues facing higher education in South Africa.
These included changing the way government funded universities; increasing access for disadvantaged black students to higher education; redressing the racial and gender demographic profile of teaching staff; and Africanising and decolonising the curriculum. This working group and its output were designed to help institutions of higher learning to position themselves as agents of transformation in society.
The information gathered by this working group contributed to how Mbeki thinks today of “the university” and its role. But he was also shaped by the more distant past, taking the audience back to 1963. Julius Nyerere was inaugurated that year as the first black Chancellor of the University of East Africa (today the universities of Dar es Salaam, Nairobi and Makerere). The 1960s were dominated by African nationalists’ demand for African universities that were supportive of the nation-building projects and national development plans.Advertisement

Mbeki also drew from a more modern national development plan. It was drafted in South Africa just a few years ago and is intended as a blueprint for the country going towards 2030. The national development plan describes universities as key institutions in a developing nation. Their task is to produce the necessary skilled labour and relevant knowledge for South Africa. They must also advance a social justice agenda in a country emerging from apartheid colonialism.
Mbeki also described universities as, ideally, institutions that respond to local as well as global imperatives. They should also work consistently against all forms of prejudice. They ought to be, he said, perpetually in search of the “elusive thing: truth”.
But South Africa in 2017 has a problem: it is perpetually in a frustrating moment of “waithood”. Commissions of inquiry take months, even years, to “inquire” into what’s already known about social ills. Right now, the country is waiting for the findings of a commission into higher education and training, specifically around the issue of fees. It completed its work some months ago. Now South Africans wait for answers.
Mbeki alluded to this lack of haste and urgency by quoting Nyerere:

Yet it […] must be realised that we are in a hurry. We cannot just think, and debate endlessly the pros and cons of any decision. We must act; we have to tackle our problems now.

This, then, is how Mbeki thinks of “the university” and its role. What of decolonisation and the role of knowledge in Africa?
African Renaissance and identity
Mbeki has repeatedly called for the “renaissance of Africa”, most famously during his “I am an African” speech in 1996.
During his speech at UNISA, Mbeki explained what this “renaissance” would entail: eradicating the legacy of centuries of slavery, imperialism, colonialism and neo-colonialism. These processes, he said, produced “a demeaning European perception of Africa and Africans”.
The key challenge is how universities help to achieve this renaissance and radically create a new view of South Africa, Africa and Africans while they themselves are stuck in the recycling of Eurocentric knowledge.
And these institutions were themselves imagined and constructed on the logic of a paradigm of difference. They emerged with racial, regional, patriarchal, xenophobic and hierarchical mentalities – all designed by colonialism. Surely it’s a mammoth task to expect them to play a meaningful role in social change and the transformation of knowledge while they are discursively entrapped in racism, tribalism, regionalism, sexism, patriarchy, and xenophobia.
This does not mean they should not try. Mbeki is correct: we desperately need a “rebirth”. He ended his speech with a reference to the Ghanaian novelist and thinker Ayi Kwei Armah who called on Africa to wake up from the spell of Eurocentrism. This awakening, Armah – and Mbeki – argued – is an essential prerequisite for intellectual rebirth and remaking the Africa society.
Sabelo Ndlovu-Gatsheni –