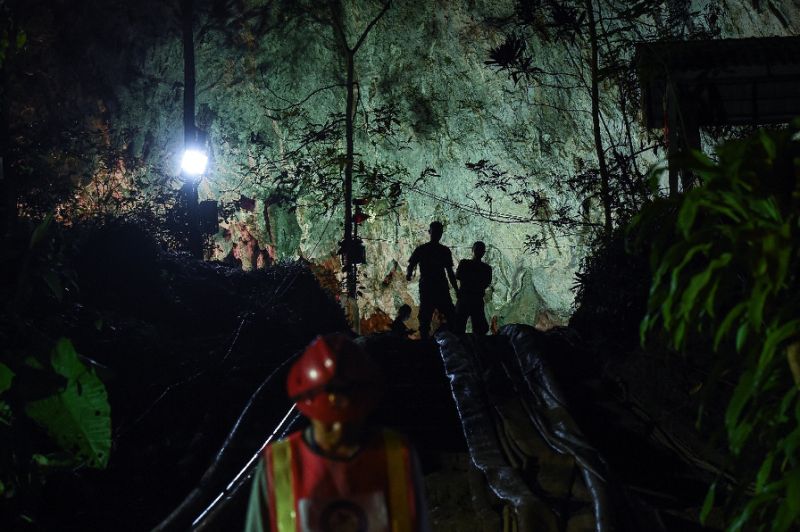 Twelve boys and their football coach trapped in a flooded Thai cave for nine days were found alive late Monday after a painstaking search by specialist divers who finally discovered the emaciated group on a mud embankment.

There had been no contact with the boys, aged between 11 and 16, since they went missing with their 25-year-old coach on June 23.

The massive international rescue effort had for days been hampered by heavy rains that flooded the Tham Luang cave in northern Thailand, blocking access to chambers where it was hoped the group would be found alive.

But late Monday Chiang Rai provincial governor broke the news of their rescue by naval divers, delighting a nation which has anxiously followed every twist and turn of the dramatic effort to save them.

“We found all 13 safe… we will take care of them until they can move,” Narongsak Osottanakorn told reporters, who broke into spontaneous applause and cheering.

“We will bring food to them and a doctor who can dive. I am not sure they can eat as they have not eaten for a while.”

The condition of the group was not immediately clear after days underground.

But dramatic footage shared on the official Facebook page of the Thai Navy SEALS showed the skinny boys in oversized, mud-slicked football jerseys crowded together on a small mud cliff surrounded by water as rescuers finally found them.

“Thank you!” one of them says, while another shouts “13” when asked by a British diver how many they are.

One of the British divers who found the group replies simply: “Brilliant!”

“Many, many people are coming… we are the first”, a diver tells them as he lights the group with a torch.

“You have been here for 10 days, you are very strong,” one of the divers tells the boys.

A rake thin child in the foreground appears to bow in gratitude and says “thank you” as his voice falters.

Outside the cave, overjoyed relatives who had clustered near the site in an increasingly desperate vigil hugged and smiled as news of the miracle rescue filtered back.

“I’m so glad… I want to him to be physically and mentally fit,” said Tinnakorn Boonpiem, whose 12-year-old son Mongkol is among the rescued group.

“I found out from the television… I’m so happy I can’t put it into words,” another relative of one of the footballers told television reporters with tears of joy streaming down his cheeks.

Earlier Monday divers took advantage of a brief window of good weather to edge further into the cave, with the water levels dropping slowly but steadily every hour thanks to round-the-clock pumping.

They had hoped to find the “Wild Boar” team on an elevated ledge dubbed “Pattaya beach”.

But the boys had retreated 300-400 metres further as the ledge was submerged, Governor Narongsak added.

The team’s travails appear far from over with a complex operation predicted to try to bring the group several kilometres through the cave — which is still partially submerged and is linked by tight passages.

Worrying predictions of heavy rains later this week mean rescuers must scramble to shuttle help and supplies to the stranded kids.

Loved ones, friends and teachers of the “Wild Boar” football team refused to give up hope of seeing the young players again.

Scores of divers — including foreign experts — have been sent into the cave with hundreds of oxygen tanks, establishing a base camp inside the chambers over the weekend.

Thai Navy SEAL divers were joined by three British cave divers and a team of American military personnel from the US Pacific Command, including pararescue and survival specialists.

Thailand has been a nation transfixed by the plight of the Wild Boar team, with social media lighting up in support of the group and the country’s deeply spiritual reflexes stirred into action.

Officials have dropped survival kits with food, medical supplies and a cave map into a crevice in the hope some of the relief will reach the boys

Shamans and Buddhist monks have held prayers and given offerings at the cave imploring mountain “spirits” to return the boys safely.

The football team went into the cave on June 23 after a training session and became stranded when heavy rains cut them off from the entrance.

Rescuers found their bicycles, football boots and backpacks near the cave’s entrance and discovered handprints and footprints further in.

At 10 kilometres long, Tham Luang cave is one of Thailand’s longest and one of the toughest to navigate, with its snaking chambers and narrow passageways.

A sign outside the site warns visitors not to enter the cave during the rainy season between July and November.