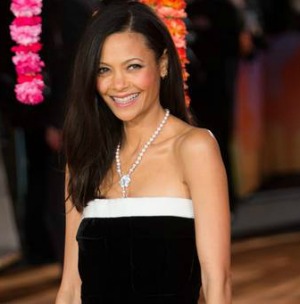 THE British actress and her screenwriter husband Ol Parker are proud parents to son Booker and daughters Ripley and Nico.
While they lead a high flying life, Thandie’s own mother grew up in rural Zimbabwe in a house full of people that had no bathroom.
“I can’t think of a more different experience. And yet, when I was a kid, of course I looked up to my mum to mother me, and she did it brilliantly,” Thandie smiled to British Hello! “There’s a very complex thing going on in the world today – a rapid change in all parts of life.
“Sometimes I look back and wonder what it must have been like when things weren’t changing so much, when you just stepped into the shoes of your parents and took over your mother’s role and that was just the way things were done. Life is very different now, and whether my generation is well versed enough to help our own children be ready for their future is just anyone’s guess.”
Thandie is currently starring in US mini-series The Slap, alongside Uma Thurman, Peter Sarsgaard and Zachary Quinto.
She’s won countless accolades throughout her 24-year career, including a best supporting actress BAFTA in 2006 for Crash.
While the 42-year-old can count a lot of people as fans, her kids aren’t exactly enamoured with her career.
“It irritates them, which I think is very healthy. They are very aware that a lot of what I do, like walking down the red carpet, is just an illusion and I don’t take the mask home with me, so they know who I am. I talk to them a lot about not wanting to be famous just for the sake of it, but having a rewarding, satisfying job, and they seem to understand that is just a by-product,” she explained.Advertisement