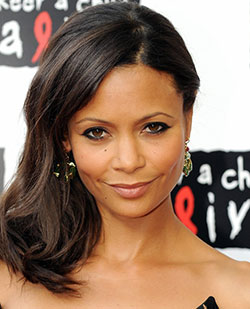 THANDIE Newton, the actress, has revealed she was the target of racial abuse when she was growing up in the UK in the 1970s.
The 41-year-old star of Crash, who lived in Penzance as a child, recalled how she and her brother Jamie were the only black children in the area and were bullied because of their race.
She said her father Nick, who is white British, tried to protect their family but the strategy of her mother Nyasha, from Zimbabwe, was to make sure her daughter kept a low profile so as to minimise the amount of abuse the family were subjected to.
She told The Times: “It was a beautiful environment, but very backward when it came to racial politics.
“I was getting good grades; I was a really happy, sparkly child, and she [Newton’s mother] was aware that the more I was achieving, the more resentment there was from other people.
“But I didn’t understand, I was only little, so it was almost like I couldn’t do enough to get her praise.
“Just walking through the town was drawing attention to ourselves. So of course that has an effect on how you want your kids to be.”
Newton, who was born in London and spent the first three years of her life in Zambia, attended a Catholic school which was run by nuns.
When she started, one of the teachers said: “We’re very excited, we’ve never had one before.”
Her mother was then told that cornrowed hair as “unsuitable” for the school’s image.
Newton has appeared in a number of hit films including The Pursuit of Happyness, Mission: Impossible II, Crash, Run Fatboy Run and 2012.
Thandie recently gave birth to her third child, a son named Booker.Advertisement