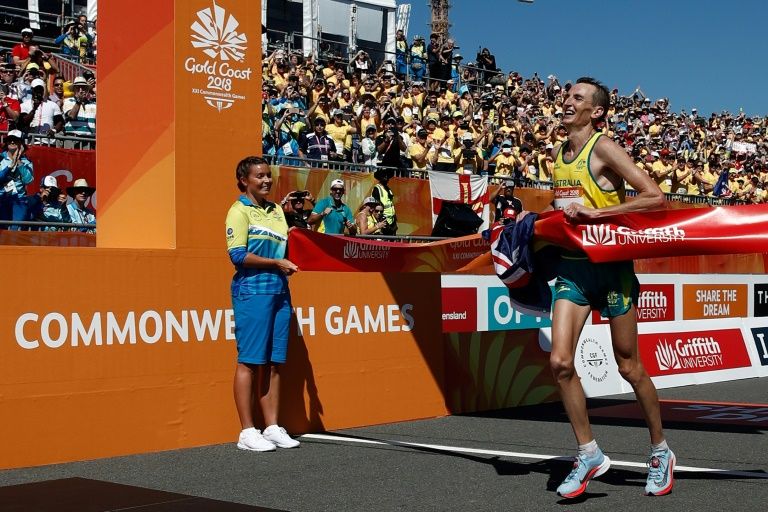 A MARATHON runner’s dramatic collapse struck a sour note on the last day of the Commonwealth Games on Sunday as hosts Australia finished runaway winners on the medals table with 80 golds.

Organisers defended the medical response but criticised bystanders for snapping pictures of a stricken Callum Hawkins, who keeled over two kilometres (just over a mile) from victory.

“I like many others was distressed to see a wonderful athlete like Callum collapse during the closing stages of today’s marathon,” said chief organiser Mark Peters.

“I was also concerned about the behaviour of a small number of bystanders who chose to take images. This is not in keeping with the spirit of GC2018.”

TV commentators and viewers blasted Hawkins’ wait for medical assistance, while many also criticised the bystanders who took pictures.

Marathon world record-holder Paula Radcliffe tweeted that there were “big questions” for the organising committee and medical staff.

“That should never happen,” she said.

Australian winner Michael Shelley ran past the prone Hawkins just as help arrived. The Scottish runner was taken to hospital but was not in a serious condition.

The Games have been painted by organisers as Australia’s chance to burnish its image for sportsmanship after a Test cricket cheating scandal which shocked the nation.

The hosts concluded the 11-day Games, involving 71 nations and territories, with 80 gold medals, way ahead of England’s 45 and India’s 26. The tally also includes para events.

But Australia suffered setbacks on the last day when their women’s rugby team, the Olympic champions, lost a sudden-death thriller against New Zealand in the inaugural final.

Kelly Brazier scored from inside her own half to clinch it 17-12 in the first extra period and avenge New Zealand’s defeat to Australia in the 2016 Olympic title decider.

Heavy favourites Australia were also stunned by England in gripping fashion when Helen Housby scored the winning goal in the last second to make it 52-51.

However, Australia thrashed Canada 87-47 in the men’s basketball final, Shelley won the marathon and David Palmer and Zac Alexander were crowned men’s doubles squash champions on the final day.

Malaysia’s Lee Chong Wei fought back from a game down to beat India’s newly crowned world number one Kidambi Srikanth in the men’s badminton final.

The final events played out a few hours before the closing ceremony, where Gold Coast will hand the baton to 2022 hosts Birmingham.