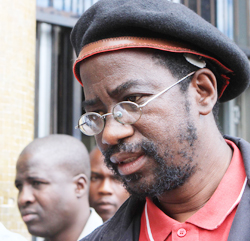 WHAT a month it has been since the March 16 referendum on Zimbabwe’s new constitution!
The giant of the global neoliberal classes, Margaret Thatcher, departs so soon after the Bolivarian titan of the most radical working people’s revolution in the last 50 years, Hugo Chavez, dies.
President Robert Mugabe’s spokesperson, Nathaniel Manheru, donning a fake Marxist cap, comes out guns blazing against International Socialist Organisation (ISO) revolutionaries, in defence of a mooted middle class-run opposition party by Morgan Tsvangirai’s oldest intellectual advisor, now adversary, the National Constitutional Assembly’s Professor Lovemore Madhuku. What is happening?
Telling is it not, that when millions across the globe mourn Chavez, the ditty “Ding-dong ding-dong the witch is gone” tops BBC charts and the British ruling class is not sure whether to honour this Colossus of the global neoliberal ruling classes with a state funeral or a ceremonial funeral? A lesson, perhaps, for this self-appointed ideological guru of the Zimbabwean national bourgeoisie, who sings himself hoarse shouting that a Tsvangirai bourgeois democratic comprador state will be a second Rhodesia – all too powerful for the masses to take on because it will hang on the aprons of the mighty imperialists.
The quandary the British ruling class finds itself in is not exactly surprising. You don’t carry out triumphal marches when Rome is burning! From Greece, Spain and Italy yesterday, Portugal, Cyprus today, and is it France tomorrow, the original heartland of capitalism writhes in painful and unending death argons, that potentially imperil this economic order, globally.
The situation has been worse for the comprador minions. Today Hosni Mubarak, formerly the giant of a ruthless and tyrannical African comprador ruling elite, lies dying in an Egyptian military prison hospital sentenced to life imprisonment. The billions of American dollars, subsidising the biggest and most powerful military machine in Africa, could not save him from rampaging and hungry youthful plebeians and proletariats ravaged to the bone by neoliberal capitalism.
And similarly, the other western comprador darling, Ben Ali, could not survive the same class storms in Tunisia. Peering over the events in the land of Hannibal, the Libyan dictator correctly read the situation and tried to rally his peers to the barricades shouting that what he saw in Tunisia was no less than Russia 1917 and had to be stopped at all costs. Unfortunately and fatally for him, his calls were in vain.Advertisement