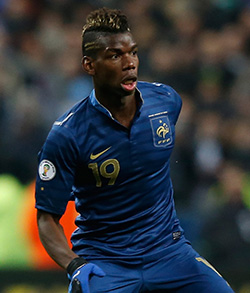 AND so, the World Cup has ended with Germany beating Argentina 1-0 on Sunday to claim their fourth FIFA World Cup title. So it is time to take stock, to reflect on all that we have witnessed and pick over the bones of it.
There have been some remarkable individual performances in the tournament, but who have been the best players? Who are the men that we will remember in 40 years time?
Here are the 20 biggest stars of the 2014 World Cup.
20) Rafael Marquez (Mexico)
Sometimes you don’t need to really run very far to succeed in international football. Marquez, who became the first man to captain his country at four World Cups, didn’t really have to, imperiously patrolled the Mexican defence with the authority that a wily 35-year-old who has seen most things in the game can bring. He won’t be around for another World Cup, and the Mexico side will look truly strange without him.
19) Juan Cuadrado (Colombia)
The Fiorentina winger can be a frustrating character, but it was very much Dr Jekyll rather than Mr Hyde that turned up in Brazil for Colombia. The winger’s often frantic but undeniably effective runs were a feature of just how exciting Colombia were going forward, offering some explosive pace to go with the craft of James Rodriguez. While he might be an infuriating character over a full season, in a tournament when individual moments are king, Cuadrado is an ideal player.
18) Hector Herrera (Mexico)
No relation to Mexico’s rather exuberant coach, Hector Herrera proved a metronome at the heart of their midfield, his slick passing and box-to-box energy proving crucial as they progressed from their group. Two notable facts about Herrera: his nickname is ‘the Skunk’, and his agent is Nicky Blair, son of Tony.
17) Daley Blind (Netherlands)
Son of Netherlands coach and former Dutch defensive great Danny, Daley Blind looks like he has certainly inherited plenty of his father’s ability. While attention was obviously elsewhere in the Netherlands’ destruction of Spain, Blind was superb and perhaps the key to Louis van Gaal’s system that day, because few others could have done such a good job at left wing-back.
16) Enner Valencia (Ecuador)

One of the surprise packages of the World Cup, the striker was one of the few Ecuador players to make an impression as they dropped out at the first round stage. However, he did inspire their only win, a 2-1 success over Honduras, and indeed scored all of their three goals at the tournament. Currently playing for Pachua in Mexico, he will surely attract plenty of attention from Europe after this World Cup.Advertisement

15) Matt Besler (USA)
It’s not often that the USA are underdogs at anything, but they were at this World Cup, and they seemed to revel in it. Their success was more built around a team performance than any outstanding individuals, and while DeAndre Yedlin and Kyle Beckerman were both outstanding, their key man was centre-back Matt Besler, the Kansas City defender who was at the heart of their many superb rearguard actions.
14) Sofiane Feghouli (Algeria)

Algeria were arguably the story of the World Cup, breaking out of their group for the first time in the nation’s history, very nearly getting past Germany and, perhaps more importantly for the neutral, doing it in some style. Much of the reason for that was Sofian Feghouli, the Valencia playmaker who inspired most of their many exhilarating attacks.
13) Mathieu Valbuena (France)

As Didier Deschamps chopped and changed his team throughout the tournament, it looked like he didn’t know what his best team was. However, it was clear he knew that Mathieu Valbuena was in it, the diminutive Marseille man providing the creative spark for much of France’s best work. He may only have scored once in Brazil, but without him the French would not have been nearly as impressive as they were, certainly in the group stages.
12) Guillermo Ochoa (Mexico)

The toast of the World Cup after some remarkable performances between Mexico’s sticks, the goalkeeper is of course hunting for a job after leaving Ajaccio at the end of last season. While he was of course hugely impressive in Brazil, suitors might want to consider that he was the custodian for a team that were relegated last term, so whether rumoured moves to Arsenal, Liverpool and Malaga will materialise remains to be seen.
11) Paul Pogba (France)
Every time Paul Pogba produced a brilliant driving run, or a pinpoint pass, or made a vital tackle, Manchester United fans must have sadly shook their heads, cursing what they could’ve built their team around for the next decade or so. Pogba is perhaps the complete midfielder, as happy attacking as he is defending, as adept at breaking up play as he is at making it, as he showed on a number of occasions throughout this World Cup. He and Blaise Matuidi could be at the heart of this French side for years to come.
10) Javier Mascherano (Argentina)
Word is that Javier Mascherano will be allowed to play more in his favoured midfield role under Luis Enrique at Barcelona next season, and that decision looks all the more wise after his performances in Brazil. An unsung player in an unsung position, Mascherano has of course been behind Messi and perhaps Angel di Maria in the headlines for Argentina, but he has perhaps been their most important player, screening a relatively inexperienced defence with typical nous and expertise, and of course some well-placed and controlled aggression.
9) Alexis Sanchez (Chile)

Penalty shoot-outs are a hugely entertaining way to decide football matches, but they are also undeniably cruel, no more so than when a player who starred in normal play misses and costs his team. Sanchez was simply superb as Chile made it out of this World Cup’s group of death, but couldn’t convert his kick when it came to penalties against Brazil. Barcelona are selling Sanchez to make room for Luis Suarez, and on the evidence of this World Cup they could be making a huge mistake.
8) Neymar (Brazil)

The question may always be asked of whether things might have been so different for Brazil if their talisman was available for their semi-final against Germany. Despite his enormous talent, not even Neymar could have prevented their exit, but Brazil badly missed the only man in their line-up that even compares to the greats of the past, dragging them through the group stage almost single-handed. And for that reason, this World Cup will always be regarded as the great ‘what if’ for the Barcelona man.
7) Keylor Navas (Costa Rica)
It’s been a World Cup of excellent goalkeeping performances, and Navas was perhaps the man that stood out the most because he and his team were such a surprise package. Costa Rica didn’t lose a game in normal time and kept three clean sheets in their five games, and much of that was down to Navas who was superb throughout, excelling particularly in their 0-0 draw with the Netherlands. While signing players after a good World Cup can often be a risky business, talk of a move to Arsenal and Bayern Munich is not unwarranted, on the basis of these past few weeks.
6) Thomas Mueller (Germany)
There’s something pleasingly old-fashioned about Thomas Mueller, from the half-mast socks to the generally quite low-key celebrations. He’s a player difficult to pin down, largely because while it’s pretty obvious that he is an excellent player, it’s not immediately clear from merely watching him why. Still, against Brazil he notched his tenth World Cup goal, and with at least two tournaments ahead of him, breaking Miroslav Klose’s recently-gained scoring record seems inevitable.
5) Lionel Messi (Argentina)
It’s been a running joke that FIFA’s infamous Castrol Index, designed to objectively rank players using some sort of mystical algorithm, has managed to find space for Jan Vertonghen and Stefan de Vrij in their top ten this World Cup, but not Messi. Match-winning goals against Bosnia-Herzegovina (even though it took a little deflection) and Iran, plus being the driving force behind the second round win over Switzerland, comfortably put him on our list, even if FIFA are yet to be convinced.
4) Manuel Neuer (Germany)

Everything you needed to know about Manuel Neuer could be seen after Oscar scored Brazil’s consolation in their semi-final. His team was winning 7-1, having handed out perhaps the biggest humiliation in World Cup history, but the Bayern Munich keeper was absolutely furious that his team had even conceded once. His frantic dashes off his line can look rather frightening, but at the moment it’s hard to make a case for anyone else to be the best keeper in the world.
3) Philipp Lahm (Germany)
The debate about where Lahm should play in the German side simply highlighted just how special he is, because he is Jogi Loew’s best player in at least two, probably three different positions. His rapid passing makes him a perfect man to play at the base of midfield, while he is so comfortable on either side of the defence that it’s sometimes tough to see why he would play anywhere else. It would be fitting if one of the finest players of his generation was to lift the World Cup on Sunday.
2) James Rodriguez (Colombia)

David Luiz was not being disingenuous when he asked the crowd to hail James Rodriguez after Brazil knocked Colombia out, for this was a tournament when one of the better young players in the world became a genuine star. Two of his goals – the run and delicate dink against Japan and the outrageous chest and volley against Uruguay – were among the best of the tournament, and it is something of a shame that he had to go home after only five games. Still, we will be seeing plenty more of this remarkable talent in the future.
1) Arjen Robben (Netherlands)
Players who rely on pace are supposed to lose their powers as time goes on, either because their bones are creaking or their hamstrings have twanged one time too many, and they lose their main weapon. Not so Arjen Robben, who not only seems to be getting better but (and this might be an optical illusion) getting faster too, which is remarkable to say the least. Of course there will always be a small fly in the ointment with a player like Robben, but he has toned his diving down rather since the Mexico game, even if that seems like the faintest of faint praise.