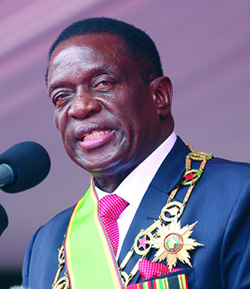 UNTIL a few weeks ago, most Zimbabweans had known no leader but Robert Mugabe. That changed when he resigned after 37 ruinous years in power—helped along by a military “intervention”, mass demonstrations and the collapse of support from his party. The move has unleashed a wave of optimism among a people accustomed to bleak survivalism.
Mugabe’s successor, Emmerson Mnangagwa, took office on November 24th, accompanied by a surprising amount of popular goodwill. Mnangagwa may have been Mugabe’s right-hand man for decades, but during celebrations in Harare, Zimbabweans of all stripes waved his photo and made gestures imitating a crocodile, in reference to his nickname. He now has an incredible opportunity to implement the reforms that could improve a miserable economic situation.
Under Mugabe, Zimbabwe deteriorated on almost every measure. Its agriculture was harmed by a land-reform programme that approved the seizure of white-owned commercial farms. The riches of a huge diamond find were squandered. Rights abuses ran rampant, especially ahead of elections. Infrastructure crumbled.
The country had to ditch its currency after a bout of hyperinflation that hit 500bn%. Zimbabwe now officially uses the American dollar, but it has complicated matters with “bond notes”, a pseudo-currency worthless outside Zimbabwe’s borders, and a mess of electronic money. Nearly three-quarters of the population live in poverty. Millions have simply left the country. Of those who remain, an estimated 95% grind out a living in the informal sector. The grim list goes on.
Unwinding some of Mugabe’s more deleterious policies would be a start. Mnangagwa has ordered that a white farmer evicted from his land should be allowed to return, and has promised to compensate others. He declared three months’ amnesty for a return of stolen funds.
A budget delivered on Thursday by Patrick Chinamasa, the finance minister axed by Mugabe and reappointed by Mnangagwa, seeks to increase investor confidence by promising a “new economic order”. This includes cutting spending and easing the “indigenisation laws” that currently force companies to hand over 51% stakes to black Zimbabweans (read: politically connected bigwigs).
Mnangagwa’s other cabinet picks—loyalists within the still-ruling Zanu PF party, plus army generals—have been less well received, however. Many had hoped Mnangagwa would include members of the opposition. Ahead of elections in August, a revamped electoral commission, proper international observers and voting rights for Zimbabweans in exile would go a long way to counter the usual rigging. State media, long used as a propaganda tool by Mugabe, should be unshackled.Advertisement

Such reforms could loosen Zanu PF’s grip on power, but ultimately Zimbabwe needs outside help. Foreign reserves are almost empty and the fiscal deficit stands at 12-15% of GDP. Inflation is rising again. If Mnangagwa makes headway with both economic and political reforms, financial assistance and investment could pour in. Donors, recognising that the army is now entrenched in politics, will want to see that progress is not stalling (under the “unity government” formed in 2009, reform pledges were not met).
Leaders in civil society have argued for a “transitional authority” of technocrats that would help rebuild institutions. Skilled Zimbabweans living abroad could be lured back by an economy on the rebound.
Even without dirty tricks Mnangagwa’s party could potentially win the next election, given the fractious state of the opposition. If he were to grasp the opportunity to implement real reform, Mnangagwa would win broad support and a decisive victory. But without efforts to deepen Zimbabwe’s democracy the country risks slipping back into the quagmire.
This article is taken from The Economist.