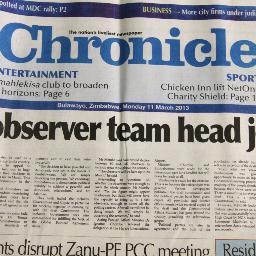 ACTIVISTS from Matabeleland have reacted angrily at a cartoon carried in Thursday`s edition of The Chronicle, which they said depicts people from the region in bad taste.
The Bulawayo based daily is owned by the state controlled Zimbabwe Newspapers group.
The cartoon, which was drawn by well-known cartoonist Wellington Musapenda, depicts two scantily dressed women who pass a comment on a newspaper billboard, inscribed with the words, “Mat`land, Midlands post worst school results.”
In response to her friend Thembi, the other woman remarks that, “We excel in other areas, don’t we Thembi.”
The Chronicle editor, took to his Facebook page where he revealed that the cartoonist has since been suspended and a formal apology will be published in the Friday edition of the publication.
“Cartoonist Mr Musapenda has been suspended. For the avoidance of doubt, I was off work on Wednesday.
“As I understand it the cartoonist did not submit it to duty editor for approval or disapproval and took it straight to subs desk, by-passing the duty editor.
“It`s like reporter taking story straight to subs. We`re apologising tomorrow (Friday) and cartoonist must carry his own cross (sic),” wrote Mduduzi Mathuthu.
South African based pro-Matabeleland activist, Ngqabutho Mabhena said the cartoon suggests people from the region do not value education.
“This is the worst cartoon which seeks to divide the working class by presenting a section of our society as people who don`t value education but rather people who find comfort in sex work.
“Instead of addressing the issues that affect low pass rate in the region of Matabeleland and Midlands, (The) Chronicle finds it news worthy to insult the very consumers who buy their newspaper daily. It`s time we boycott this newspaper,” said Mabhena.
Apology demanded
He called for the immediate suspension of the cartoonist and a formal apology to the “working class in Matabeleland and Midlands”.
Another activist from the region, Samukeliso Khumalo, had no kind words for the cartoonist and the publication.
“This guy comes all the way from Harare with pre-conceived ideas that Matebele people are lazy, lazy men with promiscuous women and this is the making by the political leadership of this country that looks down upon this region. Advertisement

“They have destroyed our educational facilities, industries and they turn around and call us names. The cartoonist is a mouthpiece of a big network,” she said.
People from Matabeleland have for a long time accused the successive Zanu PF-led governments of deliberately under-developing the region, in what is thought to be a sinister plot to undermine the region which is predominately populated by Ndebele people and other minority ethnic groups.
President Robert Mugabe last year took a lot of flak after he described the Kalanga people as uneducated and responsible for petty crime in neighbouring South Africa.
He is also said to be the architect of the Gukurahundi atrocities in the 1980s, which sought to wipe out the predominantly Ndebele people from Matabeleland and Midlands provinces