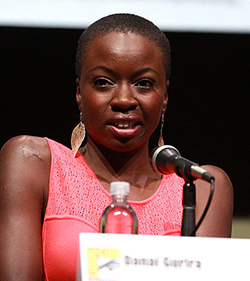 A powerful drama set in 1890s Zimbabwe examines the role of faith, belief and custom

HIGH quality global journalism requires investment. Please share this article with others using the link below, do not cut & paste the article.
The furniture on Rosie Elnile’s set for The Convert suggests Victorian order and permanence: a neat writing desk, a handsome — if faded — chaise longue, a highly polished “occasional” table. But the cracked floor beneath it and the mound of red African earth spilling in from the corner tell another story.
It’s an eloquent design for Danai Gurira’s rich and gripping drama, set in 1890s Zimbabwe and depicting the impact on a small group of people as resistance rises against colonial power.
The home, from which the action never moves, is that of Chilford Ndlovu, a fervent Roman Catholic convert who has been left in charge of the flock by British missionaries.
Chilford, who speaks as though he has swallowed an English dictionary and is played with a touching mix of pomposity and vulnerability by Stefan Adegbola, rises to his adopted religion and duties with sincerity and passion.
He saves his housekeeper’s niece, Jekesai, from a forced marriage by taking her in as a servant and soon discovers, with delight, that she is a fast learner and a stirring speaker.
Within months she is working with him as Ester, his protégée, preaching to the local community. But his hardline approach when she wants to visit her relatives for an important family ritual opens up deep, conflicting loyalties within this loving, loyal young woman.
Meanwhile, rebellion is spreading and Chilford, doing the white man’s work, is in danger of being branded a traitor. It’s a long play, has a few plot twists too many and occasionally shifts into historical report, but Gurira expresses powerfully the trauma and damage of cultural imposition, deploying language skillfully to suggest the impact on identity, and examines the role of faith, belief and custom.
She writes with great sympathy about those trapped in impossible positions by political events and her characters are compelling and complex.
Christopher Haydon’s vivid staging exerts a slowly tightening grip and in his fine ensemble Clare Perkins, as Jekesai’s solicitous aunt, and Joan Iyola as a fiercely intelligent and independently-minded friend, stand out.Advertisement

At the heart of the production are two excellent performances: Adegbola ably suggests the personal price Chilford has paid in his wholehearted devotion to a new cause and Mimi Ndiweni is moving as Jekesai, taking to her new name and religion with quick wit and bright-eyed enthusiasm, but gradually clouding before our eyes as the complex significance of her role begins to emerge.