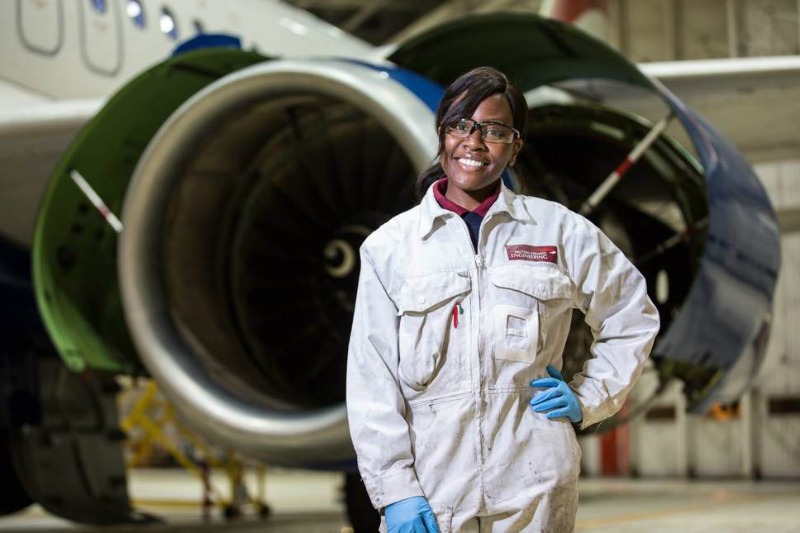 A female engineer with British Airways is helping inspire other women to fix jets.

Tsungi Maruta, 22, fell in love with aircraft from the age of five when her mother Violet was regularly flying between London and the family home in Harare, Zimbabwe.

After moving to the UK with her family at six, Ms Maruta was in sixth-form college in 2016 when the airline opened its apprenticeship scheme.

At school and college, Ms Maruta had found there were no role models or degree courses that would allow her to follow her career path.

“I’m a big believer in passion and if you’ve got it, it will sustain your dreams,” she added.

“It helps to just keep going and never take no for an answer.

“I didn’t have role model when I was growing up. Whatever stereotypes there are of a ‘BA engineer’, as a 5ft 2ins woman I challenge them all.

“So it’s all about visibility to encourage more women to join.

“Entering a male dominated world can be daunting but for me it’s been very positive.

“The guys I work with are really supportive and make me feel part of the team. I think my presence has had a positive impact on the men I work with too.”

Ms Maruta, of Ealing, is one of a growing number of female mechanics fixing BA’s 300 planes, including Airbus A380s and Boeing 787 Dreamliners.

Engineering is one of the most diverse areas of BA’s ground crew with an increasing number of women. But the national carrier wants to recruit more in 2019, its centenary year.

From the age of five, I knew I wanted to be an aircraft engineer. I owe that to my Mum. I grew up in Zimbabwe and she flew between Harare and Heathrow quite often.

“Seeing the mechanics sparked my curiosity. I was thinking ‘What’s that about?’ and it stemmed from there.