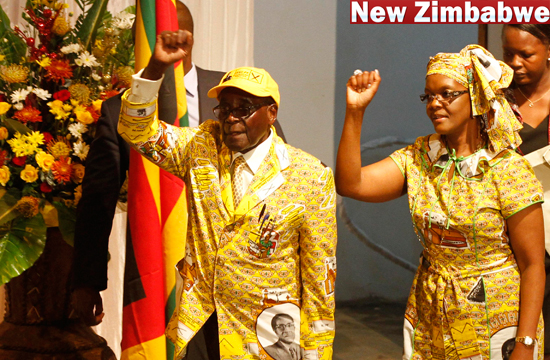 ZIMBABWE is a nation under siege. Yes, we are a tormented nation at cross roads. When a country is being led by a nonagenarian who unwittingly clings on to power, notwithstanding clear signs of frailty and fatigue, compounded by the natural ageing phenomenon, and when such a leader, totally misreads the mood of the nation and brazenly believes that he is still popular and irreplaceable as head of state, an absurdity he shares with his wife, then such a nation is in serious danger of sliding into anarchy.
This is the sad situation Zimbabweans find themselves in. Recently, both President Robert Mugabe and his wife Grace had the privilege of interacting with the nation during which they both gave insights on various national issues and, more significantly, on the succession issue. In an interview with the Zimbabwe Broadcasting Corporation Television, (ZBC-TV) on the occasion of his 93rd birthday, President Mugabe insinuated that the nation had no suitable candidate to succeed him.
His sharp-tongued wife, while addressing a rally in Buhera, lyrically waffled something to the effect that President Mugabe was irreplaceable. She, unbelievably, had the audacity to tell the world that Zimbabweans would vote for Mugabe’s corpse. Such shameful, disgraceful and patronising outbursts that clearly border on unmitigated insanity should never be dignified through whichever channel.
It is not so much about Grace’s foolish and mindboggling utterances that has irked most Zimbabweans, but rather Mugabe’s brazen hypocrisy and downright treachery, typified by the condescending and disparaging remarks over the suitability of his lieutenants to succeed him, particularly his Vice Presidents.
It was obvious that the remarks were meant to discredit and undermine the credibility and integrity of those suspected of harbouring ambitions to succeed him. It is indeed saddening, that at the age of 93 and after 37 years in power; Mugabe still has the temerity to tell the world that he has no capable successor with the necessary pedigree to take over after him.
This, disconcertingly though, is a clear manifestation of a leader whose style of management has gone awry and who believes he is the revolution himself and must thus, go into the grave with everything. That he maintains a circumspect view over his lieutenants’ commitment to defending the revolution and national policies when he is gone, exposes the folly about the popularity which he has ascribed to some of his policies.Advertisement

It is also intriguing to note that Mugabe would wish he is succeeded by a nonentity with no capacity to perform and one who would not threaten the so-called legacy. This is why he dreams of a future in which, after his departure, Zimbabweans will nostalgically look back and fondly remember him.
In my view, however, anyone who takes after Mugabe will not fail. This nation cannot deteriorate beyond its current state of affairs. The incoming leader should therefore fully understand and appreciate this. Zimbabwe requires a pragmatic leader, one who has the courage, stamina and the resolve to implement policies that are in the interest of the nation regardless of whether they are diametrically opposite to those implemented by Mugabe. There is no point in continuing to celebrate failure and mediocrity that is disguised as patriotism. This will not take us anywhere as a nation.
Mugabe’s undocumented Look East Policy must be interrogated and challenged and without any reserved commitment, should be replaced with a look everywhere policy. In addition, his lip service and lackadaisical approach to dealing with corruption should be overhauled and replaced with a heavy and brutal treatment of those found to be engaging in corrupt activities.
There is no denying the fact that Mugabe has failed this nation in a big way. To most Zimbabweans, he stands as a monumental disaster and a colossal symbol of failure who shall not escape the glare of history authors. He certainly cannot be the template or model from which the qualities expected of future national leaders are derived. He therefore has no moral compass to prescribe to Zimbabweans the qualities his successor should possess.
As for Grace, she has no political life of her own. Shae has no political gravitas, apart from the survival instincts she derives, courtesy of her proximity to President Mugabe. Grace will not survive beyond her husband’s political life. Once Mugabe comes off the stage, she will shrink into oblivion. Those who think she will take over from her husband are day dreamers. That will not happen under the sun.