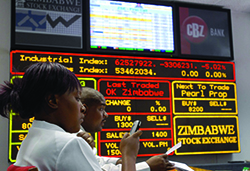 HARARE: The Zimbabwe Stock Exchange’s mining index has more than doubled this year, as punters bank on the bright outlook of Bindura and RioZim, who have both emerged from difficult times.
The resources index only has four counters, Hwange Colliery, Falgold, Bindura and RioZim with investor interest in the latter two driving the spectacular rise, analysts said.
Year-to-date, the mining index rose by 142.66 percent to 57.51 points, its highest level since January last year. On a quarterly basis, the index is up 116.12 percent.
The ZSE indices are the fastest growing in southern Africa this quarter, as local investors seek refuge in valuable stocks after the Zimbabwe government introduced local ‘bond notes,’ which President Robert Mugabe called a ‘surrogate’ of the US dollar, as the new currency.
Interest in Bindura and RioZim, however, appears to be driven by their improved performance and their positive outlook, analysts say while Falgold and Hwange remain mired in despair.
“The mining index is driven by fundamentals, for example Bindura and RioZim published very good sets of results which showed much improvement this year relative to the same period last year,” said an analyst with a local asset management company who requested anonymity as per industry standard.
The glitter of RioZim
“For RioZim the price of gold over the past year has been relatively high and this can be attributed to its improved performance in the previous period. Also, some of the RioZim debt was taken by (government’s bad debt asset manager, the Zimbabwe Asset Management Corporation), thereby enabling the company to get cheap sources of finance and expand its business at a lower cost,” the analyst added.
Zamco acquired RioZim short-term debt of nearly $34 million in January this year, a deal which cut the resource group’s finance costs by half.
In the half-year to June, RioZim narrowed its after-tax loss from $6,9 million last year to $403,000, with a 40 percent growth in revenue driven by an increase in gold production. Revenue grew by nearly half, to $32,6 million from $23,1 million last year. Operating profit stood at $2,3 million from an operating loss of $2 million last year.
Gold production was up 76 percent to 775kg with production at the recently revived Cam and Motor mine at 405kg while Renco produced 370kg. Finance costs fell by 46 percent to $2,5 million compared to $4,7 million last year, and the company reported that it is current on all its obligations.Advertisement

It recently reached an agreement to buy Falcon Gold’s Dalny Mine Complex, which has been under care and maintenance since 2013. The complex includes the mine, a gold processing plant, several surrounding gold claims as well as equipment and a mining compound.
RioZim believes the acquisition provides attractive exploration ground with potential to expand its gold operations.
Its share price has picked up 58,5 percent in the quarter to date and 166,3 percent so far this year to trade at 27,7 cents.
BNC emerging from the deep
Bindura’s share price is up 241,7 percent this year — and 169,7 percent on a quarterly basis — to date and year to date respectively and is trading at 4,1 cents.
It reported a profit after tax of $1,2 million in the six months to September from a loss position of $3,4 million last year, driven by an increase in production. In the same period, BNC raised nickel production by 23 percent from 1,555 tonnes last year to 1,866 tonnes and managed to contain costs. It also sold 3,464 tonnes of Nickel concentrate compared to 2,762 tonnes achieved last year, pushing revenue up nine percent from $20,6 million to $22,4 million.
Additionally, costs dropped by a third to $5,759 per tonne compared to $8,601 per tonne last year.
Construction of the smelter was 71 percent complete with $19,5 million having been spent but commissioning was now expected next year. However, analysts say Bindura needs the price of nickel to range between $12,000 and $13,000 per tonne to make it viable.
Nickel prices during the half year period averaged $9,541 per tonne compared to $11,787 last year.
Bad news mounts for Hwange but..
Hwange Colliery’s financial results over the last five years reflects very poor performance while sales of Hwange’s major products: coal and coke have been dropping since 2012.
The coal miner reported a $28 million net loss for the six-month period to June 30. Subdued commodity prices also contributed to the fall in revenue. Finance costs have been rising since 2014 as the company continues to finance its operations with borrowings as reflected by an increase in company’s debt from $10.8 million in the full year 2014 to $29.8 million in 2015.
In the half-year results released this year, the company reported a negative equity position of $106.32 million compared from a negative $6.88 million recorded in the same period last year on the back of persistent losses. As a result of accumulated losses, the company has failed to honour its obligations and the company has so far lost litigation cases amounting to $44.9 million.
The mid-term financials showed current liabilities of $311 million, of which $256 million was under trade and other payables, against current assets of $61 million.
However, the company is set to restructure its balance sheet after the largest shareholder, the government with 36.77 percent of equity, agreed to restructure short-term obligations amounting to $87.9 million into long term financial instruments, a move which is expected to relieve the company from its constrained working capital position.
Falgold’s future remains murky
Falcon Gold has posted a loss of $351,000 for the six months ended March 31, 2016 due to high maintenance costs at its closed Dalny Mine, which it recently sold to RioZim. Gold production also slumped by 18.5 percent to 3, 687 ounces compared to 4,515oz in the previous year.
The sale of Dalny is expected to bring relief to Falgold, which earlier this year said it had fallen on hard times and could close operations permanently due to the current lack of profitability and the economic viability of its mines. The disposal will allow Falgold to rationalise its asset base and focus on the mining efforts of the group
The company also said it has stopped exploration activities and is still considering shutting down its remaining mining operations, Turk Mine near Bulawayo.
Given that Bindura and Riozim contributed 93,69 percent to the total market capitalisation of companies under the mining index, any further improvement in the two counters will have a large positive effect on the index.