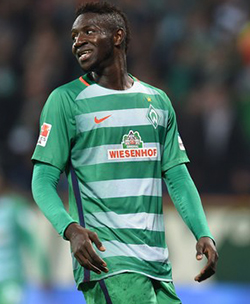 OUSMAN Manneh last month provided one of the most beautiful fairytales you’d ever hear of, a heart-touching inspirational story that will leave you smiling – and a tear in the eye too.
Such was the effect on many who read about it, all the more on me as his story struck a similarity with that of someone I’ve known and called a friend for the past seven years.
But first, let me explain who Ousman Manneh is. He is the teenage footballer who scored his first goal for German top-flight football club Werder Bremen in October, two years after arriving in the country as a refugee.
Werder Bremen won the game 2-1 against Bayer Levekusen.
Manneh comes from a small country ruled by an eccentric tyrant. Yahya Jammeh is one of the world’s most ruthless dictators. He has been the country’s president since a bloodless coup in 1994 and has gained notoriety for ruling the West African country with an iron fist.
Jammeh, an oddball of note, has also claimed he can cure AIDS.
Two years ago Manneh left his entire family behind to flee the violence and unrest in his troubled homeland aged just 17 intending to start a new life in Italy.
But refugees crossing the Mediterranean Sea are not normally welcome in Italy, so the young Gambian ended up in a refugee camp in Germany where he lived with 19 other teenagers from Middle East and Africa.
His football talents were noticed in the refugee camp.
After initially turning out for lower league teams, he was signed by Bremen in 2015.
As a professional footballer in one of Europe’s richest leagues – a teenager whose fear of an inescapable grim future surpassed the fear of death in the rough waters of the sea – can now enjoy a very comfortable lifestyle, a complete far cry from the frightening levels of poverty he fled in Gambia.
Manneh’s countryman, Nanama Keita, was 26 when I met him for the first time in Ghana in 2009 – already Sports Editor of Gambia’s biggest circulating newspaper, a government mouthpiece called The Daily Observer.

IN HAPPIER TIMES: Nanama Keita meets President Yahya Jammeh while
covering a function for The Daily Observer seven years ago