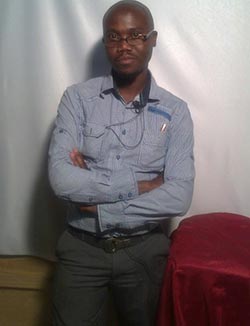 WHEN Ntando Moyo, then a form one student at Luveve High School, in Bulawayo, stood up to make a speech during a public speaking competition in front of a packed City Hall, he was a nervous wreck and was struggling – what with more than 100 pairs of eyes staring at him.
In order to lighten the mood, he threw an odd joke and the response was unexpected. His peers laughed out loud but in the end it was Ntando who laughed out the loudest. He had discovered that he was born to make people laugh.
Fast forward to 2010, when Ntando, after watching a lot of material from established stand-up comedians, decided to take comedy seriously and make a living out of it.
“My friend, Munyaradzi, encouraged me to take up comedy seriously as he had seen that I was good at it. I then started writing down a few jokes and, as they say, the rest is history,” he reminisces.
In Bulawayo, Ntando had none to look up to as there were very few professional comedians. He had to rely on his international heroes to train himself into the comedian he is now.
“It was really tough when I started out. It is still tough but we have really made some progress. I remember when I started, I would attract about 10 to 15 people and at that time it was a real achievement.
“Then with time our audiences grew up to about 30 to 50 people. Now at least we can attract more than 350 people in one show,” says Moyo.
While lauding the achievements he and fellow comedians have realised so far, he admits that the comedy industry is still far from becoming a really profitable business in the country.
He believes support from the corporate sector and arts promoters is key to the growth of the industry.
However, he has not had to face these challenges alone as there are other comedians who emerged around the same time as him whom he has partnered with to drive the industry forward.
Comedians like Clive Chigubu, Doc Vikela, Simba the Comic King, Comrade Fasto and Carl Joshua Ncube among others have emerged and popularised the genre, which was dying a natural death.
The General, as Ntando is now known in comedy circles, picks his performance at the One Hour of Comedy at last year’s Intwasa Arts Festival, Zimbabwe Comedy Festival in Harare in 2010 and 2011 and his performance with South African comedian Michael Naicker at the Bulawayo Theatre as some of his memorable shows.Advertisement

Buoyed by the need to see the comedy industry grow and blossom, Moyo established uMahlekisa Comedy Club in February 2013.
Recently, the club celebrated its first anniversary and who else other than compatriots like Clive Chigubu and National Arts Merit Award 2014 winner Simba the Comic King joined him on stage to celebrate the milestone.
“The idea to establish uMahlekisa Comedy Club came after I had been invited to a number of comedy shows in Harare. Over there some comedians got together and formed Simuka Comedy and I noticed the industry that side while in Bulawayo it was only me and Clive (Chigubu) who seemed to be pushing comedy.
“So I decided to set up a platform that will accelerate the growth of stand-up comedy in Bulawayo,” says Moyo.
His idea has started bearing some fruit with the emergence of comedians like Chichi Tate, Makina, Keith, H.O, Zwexy and Long John.
He is also on a mission to identify female comedians and so far there are one or two who have shown potential.
The  General also wants to turn the club into a profitable business.
“I want to focus more on the business side of comedy. This includes grooming and managing talent and providing comedians with a platform to perform.
“My dream is to become the authoritative source of comedy primarily in Bulawayo and also in the rest of the country,” he says.