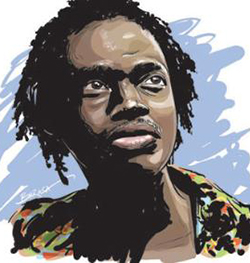 DURBAN University of Technology’s Drama Department will, this month, present The House of Hunger, a ground-breaking new stage adaptation of the award-winning novella of the same title by iconic Zimbabwean writer, Dambudzo Marechera.
The production is written and directed by Roel Twijnstra in collaboration with Jerry Pooe as musical director.
Dambudzo Marechera rose above his deeply troubled early life in Vhengere Township, Rusape, Zimbabwe, to become one of the most important creative voices of the Southern African diaspora over the past half century. His explosive novella, The House of Hunger, published in 1978, recalls his growing up in colonial Rhodesia.
Told in exquisitely crafted prose, the author touches his readers’ nerve ends through his harrowing evocation of life dominated by white settlers, while highlighting the disillusionment of a young black man, and the attendant individual suffering in the 1960s and 70s.
His raw, piercing writings secured Marechera his place in African literature as a stylistic innovator and rebel mouthpiece of the ghetto conditions that prevailed in his homeland during his childhood.
The author successfully navigates his rocky terrain with stabs of angry humour, adding to his creative compass, themes of madness, violence, despair and survival.
Signalling a new trend of incisive and visionary African writing, The House of Hunger was awarded the 1979 Guardian Fiction Prize.
In bringing Marechera’s most acclaimed work to the stage, Twijnstra says he and Pooe have tried to honour the celebrated writer’s capacity for voicing his own anger, turbulent dissent and rebellious social commentary against the far-flung injustice and cruelty he experienced during childhood, while capturing his great longing for individuality, freedom of expression and his overriding creative genius.
Speaking of Marechera and his work, Twijnstra hails the Zimbabwean author who died at the age of thirty-five as “a dislocated writer living in a shattered, repulsive environment of mindless violence, raw sex, filth and madness.
“The House of Hunger is one of the most important texts to emerge from Southern Africa in recent decades. While it is emotionally gripping and verbally pyrotechnic, its narrative is characterized by shifts in time and place and a blurring of fantasy and reality.Advertisement

Roel Twijnstra is a theatre director, writer, and lecturer originally from the Netherlands but now based in South Africa. Jerry Pooe, director and writer, is Artistic Director of Wushwini Arts and Heritage Centre.
This article was originally published by Artslink.co.za