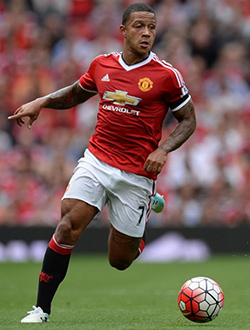 CALL him Memphis. Not Memphis Depay. Or worse, just Depay. It’s Memphis. And if this sounds like arrogance from a young star, insisting his budding brand already justifies a mononymous existence, it isn’t. The 21-year-old Manchester United and Netherlands forward has good reason to ditch his last name.
“You get reactions like: ‘What’s that boy thinking? That he’s a star?’”, Memphis told Dutch newspaper De Volkskrant in 2013. “But those people don’t know what’s going on.”
“It’s very tricky for me, because you’d prefer to play with your last name on your jersey, like everybody,” he said. “But the rift with my father is irreparable. I don’t speak to him. I have no contact with family on my father’s side. And I never will again.”
Memphis doesn’t wear his father’s name because, as he puts is, “He hasn’t earned it.”
Figuring out United’s 30-odd-million-dollar mega-signing is something of a jigsaw puzzle. He isn’t talkative and mostly shuns the media. But piece together the scraps from rare interviews, almost all of them given in Dutch in the last year and a half or so, and the outlines of a picture emerge.
Memphis was born to a Dutch mother and a Ghanaian father on the outskirts of Rotterdam. Theirs was a bad neighbourhood, rife with crime and the occasional riot on New Year’s Eve.

When he was four, his father left them. His mother took up and moved in with another man, who already had 15 children. Memphis was the 16th. It was an unhappy time
“What exactly happened at home I won’t be telling you,” Memphis said once. “I don’t want people feeling sorry for me.”
In a TV interview he gave away a little more. “In that time, I just had to survive, I just had to fight my way through it,” he said. “I could speak of things like physical abuse, but I don’t feel like it.”
Soon enough, his mother’s new boyfriend won millions in the lottery and ended things with her. Memphis and his mother lived a sparse life from then on, with money forever tight. His biological father was mostly absent and had no significant role at all in raising him.
It left a confident but confused Memphis in search of father figures. He adored his maternal grandfather, but he passed away when he was 15.Advertisement

By that time, he’d left his local club for Sparta and then moved on to PSV. But they didn’t know how to handle him. He was difficult, petulant and angry. So angry. He raged against any authority figures in his life.
He had no use for school and spent the time waiting for the van to take him to practice after class. But on the soccer field, Memphis was as gifted as he was uncoachable. While his behaviour cried out for guidance and discipline, he felt misunderstood by his coaches.
He came close to getting kicked out of PSV’s academy several times, but again and again, his obvious and abundant talent came to his aid. It was apparent, by then, that he was the most exciting winger to emerge from the Netherlands, a country besotted by wingers, since Arjen Robben.
While soccer brought conflict, it was also a refuge. “I think it kept me off the street,” Memphis said once. “I did things you’re not allowed to do; more than pranks.
“I don’t want to talk about that. But at a certain point you start thinking. If you get arrested, they might not let you play soccer anymore. I’ve seen plenty of young guys fall away. They couldn’t leave the streets alone.”
In spite of it all, he made PSV’s senior team. Ever brash and occasionally boastful, he was frustrated by how long it took to break into the line-up, though. At just 18, he told Elf magazine: “Cristiano Ronaldo, Lionel Messi, boy are they good.

“What they’ve done, I try to emulate. I have the talent and the potential is there. I’m physically strong, fast and can score goals. I’m very strong mentally. Every footballer has his own story. Everything I’ve been through has made me very mature for my age.”
Memphis finally became a starter in his third season and began popping up at the top of all kinds of lists of the best European prospects. His 12 goals from the left flank that season earned him a spot on Louis van Gaal’s World Cup roster.
In Van Gaal, he finally found that firm hand with the paternal overtones. He returned the faith with a game-winner against Australia and the second goal in a victory over Chile. “Memphis,” Van Gaal declared after that game, “has a great deal of class.”
In his final season at PSV, good for 22 league goals and the club’s first Eredivisie title in seven years, Memphis came of age. After the World Cup, his father’s family suddenly got in touch, but he froze them out.
For a while, he had supported his Ghanaian half-brother, who has spent his life in and out of jail and burned through whatever generosity he received from Memphis within days. He cut him off as well.
Memphis used to go clubbing with friends, but he thinned out his entourage. He described it as a boat to De Volkskrant.
“I’ve seen guys leave the boat,” he said. “The boat keeps getting lighter, the inner circle smaller. I’m a decent dude, who takes friends out to dinner.
“But when they stop appreciating that, it’s over – you go off the boat. It’s been crowded on the boat. When you’re lonely, you’re more likely to let people in. But the boat is quiet now. It sails quickly and steers lightly.”
These days, Memphis prefers staying in with friends and his dog and playing cards. He has a life coach and a nutritionist.
He’s embarrassed about the rap videos he once put out in Dutch. He has reunited with his father in football in Manchester, where the whimsical winger with the destructive shot was handed United’s legendary No. 7 jersey.
After two quiet games in the Premier League, Memphis announced his arrival with two goals and an assist in Tuesday’s Champions League playoff win over Club Brugge.
After his debut, a note was made of his name on the BBC’s Premier League recap show, Match of the Day. “We’ve been asked,” it said, “To just call the new kid Memphis.”