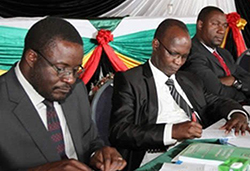 THE latest episode in Zanu PF’s intriguing drama in the battle to succeed President Mugabe involves two men blessed with the gift of the gab, Professor Jonathan Moyo and George Charamba. They have been trading tough words in social and traditional media, revealing that the succession battle is not only real but that factionalism in the ruling party can no longer be concealed or portrayed as fiction. But what does this mean in the context of the on-gong succession battles?
A couple of weeks ago, writing in his column in The Herald as Nathaniel Manheru, his pseudonym, George Charamba criticised what he christened the “anti-Mnangagwa cabal”. Charamba refuses to confirm that he is Nathaniel Manheru, but it is now an open secret that he is the man behind the name. Moyo had revealed a few years ago that Nathaniel Manheru was Charamba’s alter ego. His recent article wasn’t the first time that Charamba had shown his inclination towards Vice President Emmerson Mnangagwa. But this was also a repudiation of his earlier denials of the existence of factionalism in Zanu PF.
To close watchers of the Zimbabwean political scene, it was obvious that the so-called “anti-Mnangagwa cabal” was in reference to the G40 faction, a group of Zanu PF politicians which is resisting the idea of Mnangagwa succeeding President Mugabe, who turns 92 next month. The notion of G40 was coined a few years ago by Moyo, who is said to be the brains behind the outfit, although he denies its identity as a faction. Instead, he calls those aligned to Mnangagwa and pushing for his ascendancy to the presidency as “successionists”.
Ironically, in the latest twist of events in the succession drama, Charamba uses the term “successionists” to refer to Moyo and his G40 faction, which has prompted Moyo to call him a “word thief” since Moyo originally coined the term. Even though Charamba does not identify them by name, Moyo’s unhappy responses to Charamba’s interview confirms that Moyo and G40 were the targets of his open attack in an interview with ZiFM radio station, which was been reproduced by The Herald. Moyo has accused Charamba of using his civil servant role as Permanent Secretary to defend a “desperate faction” – by which he refers to the Mnangagwa faction.
It is important to place the current public fight between Moyo and Charamba into context. It is a reflection of succession politics but it is also a public manifestation a personal rivalry between the two men. Writing in 2006, Moyo referred to Charamba as a “useful idiot” after the latter had written a piece that was severely critical of Moyo in his Nathaniel Manheru column. The verbal fight between the two men was nasty and it was ironic that when Moyo was re-admitted into Zanu PF, he once again became Charamba’s boss.Advertisement