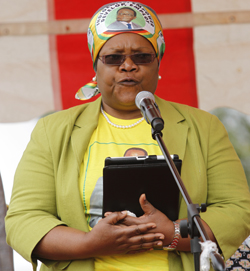 WHEN it comes to blueprints and acronyms, Zimbabwe does not have a shortage in that department. BUILD is the latest in a production line in which predecessors and contemporaries include ZimAsset, ZimPrest, Restart, Juice, Hope, Sterp and a few more. It announces the long-anticipated arrival on the political stage of Joice Mujuru, not as a newcomer, for she knows the stage only too well having been there for 34 years, but as a newcomer in the proverbial trenches of the opposition.
How time flies and with it, circumstances change! Barely a year ago, Joice Mujuru was the number two in Zanu PF, Zimbabwe’s ruling party. She was the Vice President of both party and country, destined, or so many thought, for the highest office in the land upon the departure of her then boss, President Robert Mugabe, whenever he or nature decided to make a call on his long tenure as Head of State and Government. But then a political whirlwind summoned a force never before seen on the Zimbabwean political landscape, announced itself and swept Mujuru away, far away and deposited her on a political island, where she has remained marooned, gathering herself, until now.
That hurricane, Hurricane Grace, is not yet gone – the eye of the storm is upon Zanu PF, the second column now seemingly imminent – but Mujuru has gathered and recovered herself, and stands at a safe distance from the hurricane and, from there, she has now made a re-appearance, bearing on her shoulders ladders, bricks and mortar, announcing her intention to BUILD and no doubt, inviting “Fellow Zimbabweans”, for that is how she addresses us, to join her in her proposed exercise. Ever the witty ones, some Zimbabweans are saying perhaps she should be asking us to help her RE-BUILD, a subtle reminder, no doubt, there was once something where she now proposes to BUILD and that she was part of the demolition team.
Whichever way, Mujuru’s re-emergence has generated a mixture of excitement among her followers and cynicism among sceptics. Zimbabwe has a plethora of opposition leaders, all of whom claim to have parties. Not clear is whether all of them have any followers. Ordinary Zimbabweans have become used to, and probably tired of, announcements of new political parties.
But Mujuru is a different proposition. Most people have anticipated since her ignominious departure from Zanu PF, that, at some point, she would launch a political party. That deed is not yet done but her manifesto, published in the media this week, tells the world that she is ready for the plunge. Her public rejection of her pension, a constitutional entitlement, last week gave us a hint that something was brewing. And so it is that now, she has, to all intents and purposes, joined the race for the Presidency in the 2018 elections.Advertisement