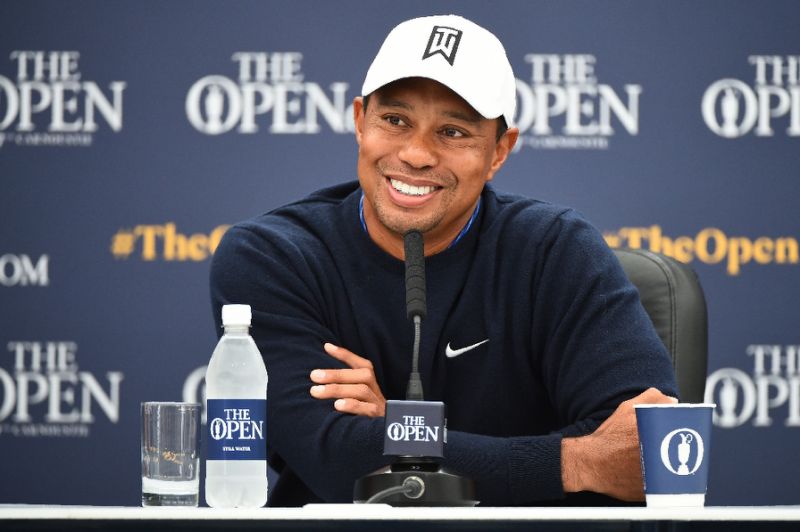 American superstar Tiger Woods returns to The Open after three years saying said on Tuesday that it is his best long-term chance to add to his 14 Major victories.

The 42-year-old — whose dominance of the sport ended with the emergence of his serial infidelity in 2010 and, from 2014, serial back problems which led to several operations — told a press conference two days ahead of teeing off at Carnoustie that links golf suited classy ageing golfers well.

The three-time Open champion, who has shown glimpses of form since returning to the circuit last December and has been in contention for a couple of titles this season, cited the examples of Tom Watson and Greg Norman, who in their 50’s came close to winning The Open in 2009 and 2008 respectively.

“As far as long-term, certainly I would say ‘Yes’, because of the fact you don’t have to be long to play on a links-style golf course,” said Woods, who has not played The Open since missing the cut in 2015.

“You get to places like Augusta where it is just a big ball park and the golf course outgrows you unfortunately. A links-style golf course you can just roll the ball.

“Distance becomes a moot point on a links golf course. Creativity plays such an important role.”

Woods, who is four off equalling Jack Nicklaus’s all-time majors record of 18, said even to be back competing at an Open represented a small victory.

“There were points when I never thought I’d play in this championship again,” he said.

“It’s great watching on TV but even better in person.

“But to come back to Carnoustie is a blessing. There were times when I didn’t think this was possible but, lo and behold, here I am in my third major this year.”

Woods, whose last victory in The Open came in 2006, says he is slowly but surely regaining his competitive edge.

“Each tournament I feel a bit better because I’m starting to play golf again,” he said.

“I feel I’ve got a better understanding of my game and it’s coming with a little more experience. Everything is going just a little bit better.”

‘I was an anomaly’

Woods, who has failed to sparkle at the two majors this year, tied for 32nd in The Masters and missed the cut at a punishing US Open. He says he has a special affinity with links courses.

“I think I’ve got experience of playing this type of golf course,” he said.

“You got to manage your way around this course.

“I have always loved playing links golf because the style of golf you have to play is creative.

“You are not going to get the perfect bounces and that is part of it.

“It is the fun challenge of it.

While the stars of Woods and compatriot and fellow great of the game Phil Mickelson have dimmed, a whole swathe of 20-something Americans, such as defending champion Jordan Spieth, two-time US Open winner Brooks Koepka and Masters victor Patrick Reed, have swept to the forefront.

Woods said this group’s emergence and their closeness — they regularly see each other off the course — is very different to his day when he was unique among his generation and not just for his natural talent.

“When I came out of college early I was an anomaly,” he said.

“No one turned professional aged 20 back then. Most players went through their four years of college and then tried to qualify for the tour.

“Thus, all the guys I had been friends with and played at college level weren’t on tour with me from the start so I gravitated towards older players like Payne Stewart and Mark O’Meara.

“By the time my generation joined the Tour I had played in Ryder Cups and Presidents Cups.