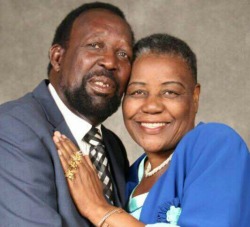 STELLA MANATSA, the woman who has been by the legendary musician Zexie Manatsa’s side for more than four decades, recalls their wedding which took place more place than 30 years ago with “pride” and as if it happened yesterday.
The Green Arrows band leader and his wife had their white wedding on the 29th of August 1979 at the Rufaro Stadium in Mbare. An estimated crowd of over 50 000 people attended the event.
According to Stella, the wedding, to her, proved that musicians were not “vagabonds”.
Also, according to her, the wedding angered the then Prime Minister of Zimbabwe/Rhodesia Abel Muzorewa because he had to cancel his rally scheduled for the same day as people chose the wedding ahead of the Bishop’s campaign event.
“The media, the following day, wrote that Muzorewa blamed us for poor attendance and said we spoiled his campaign rally,” said Zexie’s wife.
She added, “Again, to my pleasure, it silenced critics such as relatives and friends who had made fun out of me for marrying a musician- a person whom society regarded as a tramp.
“Many were shocked how the wedding was well organised, attended and couldn’t believe that a musician could do such a thing. This is the day that also helped to change perceptions about musicians.”
According to her, what some people fail to understand and tend over look is that when musicians are on stage they would also be at work.
“After the performance they (musicians) are tired, they go home and sleep. Whereas some of their fans, who will have come for entertainment, get drunk and end up hiring sex workers,” she said.
She also said on the wedding day, some local musicians like Thomas Mapfumo had to cancel their shows just support the couple.
“Back then, Zexie was such as icon, respected by many in the music sector,” added Stella as she turned towards her hubby who sitting by her side with a smile.