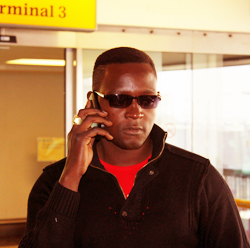 FRESH from his hugely successful whirlwind tour of the United Kingdom late last month, Suluman Chimbetu has opened up on why he is a force to be reckoned in the arts industry.
Forget great lyrics, hard work, energy and tireless dedication. For Sulu, the trick is to listen to the counsel of his employers; the fans.
“The fans are my bosses and the trick is to listen to them and give them the final say in whatsoever I will be making decisions on,” said the soft spoken artiste.
Suluman conceded that if he had his own way, he would have released a new album to follow up on his chart smashing album Syllabus last year but had to hold his horses as key fans told him their honeymoon with songs such as Sean Timba and Nhambarakishoni had not ended.
“I would have released my fifth album but the fans gave me other ideas. Many were against a new album and ultimately I had to listen to them and hold back the fresh album I intended to drop. They made the decision,” he said.
And when the fans speak, one has to be humble enough to listen and follow the instruction.
“The problem is that others may lose humility. I have learnt that with the fans, artistes have to be humble and the direction of the music will come from the fans,” he added.
Sulu’s UK tour, the fifth trip he has made guitar-in-hand to Muddy Island, has been touted as, by far one of his best performances in that country, and he has paid tribute to fans there for coming out in droves and attributed their support to the kinder weather pattern in springtime Europe.
And the show of unity with his mentor Oliver Mtukudzi has epic memories for him which he says he forever will cherish.
“Holding up the flag of my nation as I raised it with mudhara Tuku was a moment that will forever be etched in my mind,” he said.
“The fans were very responsive and loved our gesture to our country and to think we were raising the flag in a foreign land, in the United Kingdom of all places, is something that makes any artiste proud. In this case we were literally raising the flag of our country.”
And for the several artistes that are jostling for a place in the spotlight, Sulu advised that they follow his cue.
“Humility will get you a long way. It is you who make the music but ultimately the employer is the one you make the music for and they, the fans, should ultimately be respected and their demands followed,” he urged.Advertisement