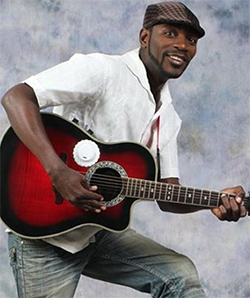 AFRO-FUSION musician, David Hondoyedzomba, a.k.a HD, has never turned back since he won the Chibuku Road to Fame Contest and the Music Cross Roads Southern Africa in 2007 and is scaling greater heights with his type of music.
Hondoyedzomba and his six-member band, the Blackways, who have released two albums so far, are currently working on their third album titled Zuvarashe.
“We are working on our third album but we are a bit behind schedule.
“Our plan was to launch it on my birthday bash on the 9th of March as we did 2015 but we will now launch it during the Easter Holiday in April,” Hondoyedzomba said in an interview with New Zimbabwe.com
He said he had cultivated a good working relationship with radio stations and club DJ’s and this time around was expecting a major breakthrough in terms of listenership.
“This new album is something radio producers and DJs are looking forward to.  It will have10 tracks, one of them collaboration with Killer Trilla, a Zimdancehall artist.
“Some of the tracks to look forward to include Mandigara dare, Chengeta ungasare, Usandisiye, Zuva rashe and Chikonamombe,” he said.
He said their first two albums, Uncle Sam and Baba munenge rombe had been well-received and had seen them being hired to perform during the opening of Parliament and at corporate private functions.
“The band collaborates with fellow established musicians including Jah Prayzah, Kireni Zulu Tuku, Progress Chipfumo, and Pah Chihera among others,” he said.
Hondoyedzomba said they played at clubs and other functions for a flat fee and did not charge any ticket fees.
Meanwhile, the musician, who turns 37 this week, will host his birthday gig at the City Sports Bar will he will share the stage with a number of local artists, among them Andy Muridzo, Kireni Zulu, Progress Chipfumo.
Garry Tight, Storm, Victor Kunonga, Malax, Agga, Edith Weutonga, Faith Candy, Killer Trilla, Caveman, Ras Caleb, Mdhara Weeds and The Seasons Band, Power Express, Mostaf, Expandables and D-Vine.
“The birthday performance for fans and friends of HD and the Blackways will be on the 9th of March at Bar Rouge starting at 7pm where all our fans can mix and mingle with HD and the band. We will also be regular at Jameson hotel’s The Usual Place on Thursday,” he said.Advertisement

He said he was back together with Sulumani Chimbetu doing collaboration shows like they did in the past year, starting with a joint gig at Bar Rouge on the 18th March.