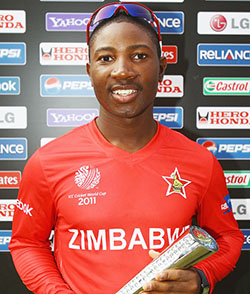 IN THE line of duty, journalists and the people they write about create, sustain and nourish healthy relationships that are special in their different nature.
And when that relationship has inspired reflection on the weakness of your own spirituality and morality as well as standing out as a shining example of dedication to strong a work ethic – you feel it has been most enriching and priceless.
Such has been the impact on me by Tatenda Taibu, the former Zimbabwe cricket player and captain who has accepted a job offer to become the country’s new convener of national selectors.
Four years ago, Taibu stunned an adoring national and international fan base when he announced he was quitting for good everything to do with the game, at the age of 29, to devote more time to church work.
And in those four years, he has resolutely refused to have nothing to do with a game that had not only been a big part of his life; the name Tatenda Taibu became, in fact, synonymous with the game in the country and walking away from it as he did, was an astonishing twist in the tale – a beautiful storyline which had ended in an anticlimax.
But one would not understand the things Taibu does, the sort of decisions he makes, without tracing what makes him the man he is. His is a compelling human story, quite a remarkable journey of a young man determined to reach his spiritual destination – a man with a sacred connection to his Christian faith.
This article is my understanding of what makes Tatenda Taibu tick.
In 2013, a year after retiring from cricket to give undivided attention to God, it so happened that India was touring Zimbabwe. A friend and Indian journalist traveling with the team to cover the series, Devendra Pandey, desperately wanted an interview with Taibu – a folk hero of sorts in cricket-mad India.
But problem was Taibu had completely withdrawn from public life, and indeed, upon me tracking him down on behalf of Pandey and also myself, the request was duly declined in the most diplomatic and politest manner.
No, he no longer spoke to journalists, Taibu told me. He had no desire to be in the newspapers ever again. He stated that he was no longer a public figure, or an idol. Jesus Christ is the greatest and only idol who ever lived, and only him is fit to bask in the limelight of media praise. Man shall not steal Jesus’s show by seeking glorification and praise only reserved for the Son of God.Advertisement

After much persuading, Taibu agreed to meet us, because he knew me well and trusted me, he said, and also as a nice gesture to our Indian visitor. But still on one condition, though, that we spoke only of the word of God.
For good measure, Taibu didn’t even miss cricket, or watch it. To him, cricket belonged to another life, safely tucked away in his past.
We accepted the condition, hoping that we would, somewhere in the middle of the interview, throw in a cricket related question and induce even half an answer.
But in the end, we didn’t need to talk about cricket.
As Taibu spoke to us in his charming house set on a vast plot of land in Harare’s quiet Meyrick Park suburb, we too got enveloped in our guest’s divine world. For that moment, time seemed to stand still as we attentively gulped the man’s fear of God and absolute veneration of the Bible.
Vintage Taibu
The heart had been looking for peace, he told us, and it had finally found it. It was vintage Taibu. Absolutely breathtaking stuff.
When we arrived at the house, we noticed the initial stages of construction work on the other side of the property. Taibu told us he was building a residential apartment block to rent out in order to raise just enough money “to do what God wants me to do.”

So cricket, a job that had afforded him such as beautiful home and a good life, a game that placed him on the world sporting map as Test cricket’s youngest captain, made him his country’s first ever black captain, a game responsible for his rise to international fame and earned him a bit of good fortune, now represented a life of worldly things – the opposite of what he wanted to do now in honour of his God, pursuit of spiritual purity and a life lived as far away as possible from public adoration.
At that moment during an interview you are almost at a loss for words and dumbfounded. Surely, Taibu must look back at his cricket days with some nostalgia.
After a quiet moment of digesting yet another empathically-delivered Taibu response, Devendra posed the question. Did he miss the glamorous lifestyle of an international sportsman? What of the travels, the airports, the hotels, the hallowed cricket grounds around the world and, of course, the money?
Not battling an eyelid, came the sharp retort, quick as a flash. This time with a dismissive semi-laugh, almost laughing off the suggestion of him reminiscing about material comforts of the past.
“I want you both to imagine a rat,” said Taibu. “It lives under the sofas and causes havoc in the house, coming out during the night to steal food when people are sleeping.
“Imagine that kind of life. If you were to take that rat and change it into a human being, do you think it would want to be a rat again?”
It was clear, also, that spirituality was in the very fibre of Taibu’s family.
What happened to him?
His two young sons, TJ and Geshem, emerged into the large television-less sitting room to greet the two strangers before quietly disappearing to their room – a refined upbringing based on strict Christian values evident in the charming little boys.
Wife Loveness admirably performed her wifely duties, serving coffee and leaving the three men to talk before joining in the closing prayer led by her husband.
As I drove Devendra back to his hotel after saying our goodbyes, no one spoke for about seven minutes, absorbing the stuff we had heard in that house.
Devendra – who had been deep in thought – spoke first, head gesturing in the direction of Taibu’s house, which was now out of sight: “Man, what happened to him?!”
Soon, he was on his mobile phone, excitedly talking to his editor at the Indian Express, telling him to expect a gem of an interview with Taibu. I could faintly hear the person at the other end getting excited too.
We were both convinced, after finishing interviewing him, that the world would never see Tatenda Taibu anywhere near a cricket ground again.
Three years later he is back in the game. I’m tempted to say never say never. But I will not.
I greatly admire Taibu for his cricketing talents, and what he has done in his life. The two of us share a great deal of mutual respect having grown up together in our respective careers.
But Taibu should not have totally walked away from the game. Cricket is a preparation of life in ways more than any other sporting discipline. It equipped Taibu well for the life he has now. As a cricketing man of his repute, Taibu also became part of a lot of people’s lives.
Cricket is a great game. True, there are some oddballs in it. But on the whole, it has a lot of good people involved, and they love God.
I’m delighted you are back, Tiba. And no, brother, you haven’t just become a rat again! You were never one.