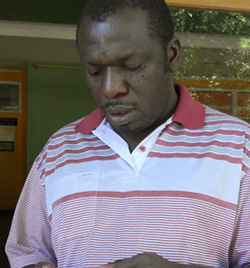 ONE of the most talked about stage plays in 2015, The Taking, returns for one more run at the Bulawayo Theatre in December.
The play, which tackles Zimbabwe’s controversial land issue, will be staged on 11 December.
A thought provoking play about land, history and the place of folklores, The Taking was penned by award-winning playwright, Raisedon Baya and veteran theatre actor and producer, Memory Kumbota.
The play has been so popular that it had a full run in Bulawayo, before featuring at some of the country’s leading festivals such as Intwasa Festival koBulawayo, Harare International Festival of Arts (HIFA) and the Protest Arts International Festival in Harare.
It features experienced actors such as Zenzo Nyathi, Gift Chakuvinga, Aleck Zulu, Elton Sibanda and Musa Sibanda.
The land – a national treasure and heritage – has been a source of conflict in the country dating back to the days before colonisation and it will be interesting to see how the writers project the historical narrative.
Using vivid imagery and clever storytelling, the play questions the role and place of storytellers and their stories in present-day Zimbabwe.
The Taking, according to the writers, takes no sides but seeks to remind us of where we come from and who we are as Zimbabweans.
In this new play a storyteller is arrested for performing folktales without a censorship or clearance certificate from relevant authorities.
During the same week a young farm labourer/maid is also arrested on suspicion of murdering the old white farmer who had adopted her while she was young. Their stories connect as the play gathers momentum.
In an interview with NewZimbabwe.com the playwright, Raisedon Baya said they felt more people deserved to watch the play.
“It is a good story that we feel many people should watch. Some of those who have watched it before asked us to bring it back,” he said.
Baya, however, lamented the decline in the number of stage plays produced this year.
“The year was very bad for the theatre sector. Few plays came out from professionals however there was a lot of excellent activity in schools,” he said.Advertisement