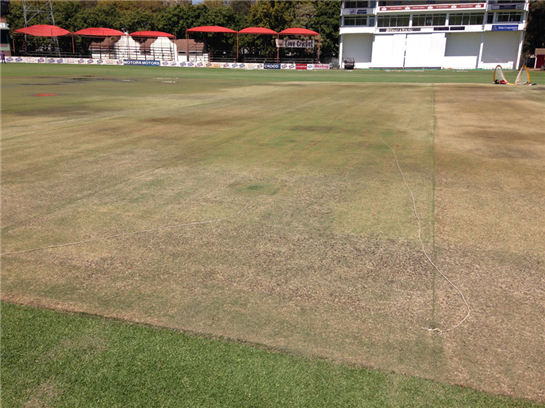 ESTEEMED Zimbabwean cricket media colleague Dean du Plessis, writing recently in a local newspaper, lamented the rather peculiar inclination towards a flat wicket at Harare Sports Club, the country’s premier cricket venue.
Dean raised the latest concerns after Harare Sports Club – as has been the case in more recent times – offered little or no help at all to the fast bowlers during our national second-string side’s draw with South Africa ‘A’ in the first unofficial Test between the two sides last week.
It’s a subject that has been on many people’s mouths, including some of the more progressive and foresighted Zimbabwean players.
The continued “preference” of such dead, low and lifeless wickets at the home of Zimbabwean cricket has counterproductive effect in the development of local players, particularly the batsmen.
Such scenario denies the batsmen the opportunity to test their skills against genuine fast bowling. It has an adverse effect on the future – and on the present too.
We see that when Zimbabwe travels to play outside the country, the batsmen looking terribly out of depth on tailor-made pitches.
It doesn’t make sense at all, especially at a time when Zimbabwe Cricket (ZC) has made some noise about placing heavy emphasis on unearthing fast-bowling talent. The structures of the game are not working in unison.
I’ve been invited to private schools where friends coach and saw encouraging stuff – kids running in, all day, and bowling really fast; raw pace and raw talent.
Yet at the senior level, where these youngsters will eventually play, you have wickets that doesn’t bounce high, as we saw in the drawn match against South Africa A at HSC.
You’d think ground curators were instructed to neutralise the effect of Vernon Philander and Hardus Viljoen’s twin pace threat. But again, in doing so, you give ammunition to the spinners, particularly if the opposition has a good set of slow bowlers.
Perhaps we could say the flat wicket was meant to give our own spinners John Nyumbu and Tino Mutombodzi an opportunity.
But then again, that would be the wrong approach; the best way to nurture spinners is to work on making them become stars on any surface.
So, having examined all possibilities, a lot of us who once witnessed Harare Sports Club being the graveyard for batsmen it used to be will ask – what the heck happened there?Advertisement

It brings me to one conclusion, that Sports Club is dead. We cannot get those old tracks anymore. Curators cannot weave magic on them.
Years of not taking care of the table has ruined it.
It’s like servicing your car. If you are only going to do it after five years, it becomes dysfunctional.
That’s what happened to good old Harare Sports Club.