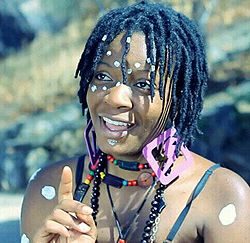 Pamhidzai Tracy Mbirimi’s soulful Afro-Jazz music has a unique freshness that stands her out as a natural singer. Known by her stage name ‘Pah Chihera’, she has just released her debut album, Runonzi Rudo, which has love birds in Zimbabwe all singing along. The title track features the slick Prince K Musarurwa who seamlessly complements her authentic voice for a heart-warming twosome:
The Truth About: Pah Chihera

Marital Status & Children: In a relationship

How did your career start, and where are you projecting yourself with all the talent currently coming out of Zimbabwe?
Music is something that I was born doing, although I had a strong passion for modelling when I was younger. I began as a backing vocalist for my Uncle Kudakwashe Prince, who is featuring in most of my tracks.
My uncle then decided to wean me and let me to record solo, with Runonzi Rudo as my first Album. I have always believed in quality and not quantity so I have taken my time to polish this album and I see myself growing and becoming a better artist .
Have you found Zimbabweans supportive?
Kusatenda huroyi chokwadi. I would like to say I’m really humbled with the warm responses I’m getting since releasing my album. Zimbabweans are really supportive and I’m very grateful.
I’m ever learning and I take praise and criticism as part of the constructive process to only make me better. As they say, ‘akubaya zanhi ndewako’.

What do you consider your greatest musical strength?

Are you currently signed by a record deal?
I’m not signed with any recording company, but I am considering Chigutiro Records. These guys are really assisting me a lot, especially Shayne Dingz, he has been supportive and I can never thank him enough for the marketing and exposure he’s giving me. I think and feel Chigutiro Records is my home.Advertisement

Do you write your own songs?
Yes, I am involved in the song writing. I’m generally inspired by real life experiences and tell stories from it. My uncle Prince K Musarurwa has also written some of my songs and we’re a great team.
If someone picks your CD from a record bar for the first time, what should they expect?
I want to think that my music is value-laden, conserves traditional values and contributes to our heritage. Most of my songs carry a message on life in marriages, respect for husbands and maintenance of their positions in the home and that is part of our culture.
I must emphasise that giving men the respect they deserve and being submissive doesn’t mean women have to put up with oppression. So my music tells life stories in an entertaining fashion, which I believe will go a long way and change the lives of many people.
On the respect theme, I also sing about the use of totems – itself a sign of respect and pride in one’s identity. I believe this should not be done away with by trying to westernise things.
What is your favourite musical instrument?