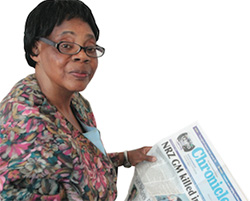 Veteran journalist Edna Machirori exemplifies the courage of women under fire, writes Peta Krost Maunder in The Media.
WHEN life is hard, most cower under pressure, while a few – like Zimbabwean journalist Edna Machirori – are inspired to help others having a tougher time than themselves.
Machirori was one of the first black women journalists in what was then the Rhodesian media when she started as a cadet in 1963. She was the first black female news editor and, later, editor on mainstream newspapers. Her rise through the newspaper ranks was despite the country’s deeply entrenched patriarchy.
Now 70, Machirori has spent her career fighting for women journalists and freedom of speech, and against corruption. She has angered members of Zimbabwe’s ruling party many a time, as well as men in and outside the media. She has been threatened, attacked and demeaned more times than she can recall.
In November last year, she won the Lifetime Achievement Award from the International Women’s Media Foundation (IWMF) for her courage, resilience and success, and for bolstering other women’s voices in the Zimbabwe media.
“Throughout my career, I have struggled against gender prejudice,” Machirori told the IWMF. “In a patriarchal society and a profession in which national issues must be debated objectively, the willingness to do so is not necessarily seen as a plus for a woman. Such a woman is seen as an aberration from the norm of what a woman should be: docile and silent.”

In her acceptance speech she said, “Powerful people in my country dislike being taken to task and held accountable for their actions by male journalists, but they regard it as … a mortal blow to their egos to have a mere woman do the same.
“I refused to be silenced when official corruption was rampant, political violence became the order of the day and some political parties used the raping of women and girls by violent militia as an election campaign strategy.”
Machirori was raised in rural Manicaland in the Eastern Highlands. Her father insisted she get a good education and, she says, “He made us [her and her six sisters] believe we could do anything we wanted in life.”Advertisement

As a child, she loved writing, read voraciously and was glued to BBC radio at night.
Her teachers encouraged her to write for the school bulletin and, later, letters to the editor at the African Daily News. The editor then offered her a position as a cub reporter. Two years later, Ian Smith’s government banned the newspaper.
“I thought my career as a budding journalist was over then,” she says. “But senior colleagues encouraged me not to lose hope.”
With their help, she began editing the Rhodesia African Teachers’ Association’s monthly newsletter. She turned this publication into one that pushed enough buttons for the Censorship Board to order her to submit all copy for clearance before publication. This was something that, until then, only the big mainstream newspapers and magazines were expected to do.
In 1974, she took up a scholarship to study journalism at the New York Institute of Technology and spent much of that decade in the United States. She married a fellow Zimbabwean and they had their first of two daughters in 1977, two years before Machirori graduated top of her class.
Returning to Zimbabwe, she was employed by The Chronicle.
“My rise through the ranks occurred mainly after independence. It was not easy and involved long years of being passed over for promotion,” she says.
“When I was appointed news editor, the first woman in Zimbabwe to hold such a position on a mainstream daily, I stagnated in that position for eight years before being appointed to edit a weekly mainstream title. Once again, I was the first black woman to do so.
“When I was appointed editor of The Sunday News, a male colleague who had been editing the paper in an acting capacity refused to vacate the office I was to occupy because he felt insulted to be replaced by a woman. He only budged after a directive from head office.”

Throughout her career, she says she experienced “the most aggressive sexism and gender prejudice”.
In a column that was published on GenderLinks, Machirori wrote: “It is widely erroneously assumed that when a woman is appointed to a pioneering position that is a sign that the walls of prejudice and gender discrimination have come tumbling down.
“Nothing could be further from the truth. If anything, entrenched gender prejudices are reinforced within the circle of the male colleagues she has to interact with. She now has to fight a lone battle to overcome entrenched gender prejudices and patronising attitudes.
“Regrettably, it is not only male chauvinists who lie in wait to be proved right that the appointment is a mistake. Sometimes fellow women, who should be offering support and encouragement, also resort to ‘pull-her-down’ antics.”
As news editor, she had to face two editorial meetings a day with the male editor and his two assistants.
“These were always combative with the three men ever ready to shoot down my ideas until one of them re-phrased and presented them.
“I was not welcome in their editors’ circle, which they regarded as an exclusive boys’ club. I was accused of being weak and of ‘mollycoddling’ reporters for not adopting the same belligerent approach.”
For most of her reporting career, she covered gender issues but also politics and other national issues. “As an editor, I believe in crusading journalism, putting the spotlight on corruption and other ills and drawing attention to problems affecting a community or a particular grouping.”
Up until 1999, she explains, journalists knew their limits but were generally free to do their work. Once the ruling Zanu PF party felt threatened by the Movement for Democratic Change, President Robert Mugabe appointed ‘a war cabinet’ in 2000.
“This marked the beginning of ‘propaganda journalism’ that required journalists within the public media to toe the ruling party line, sing praises of the Mugabe government and portray the opposition in a negative light,” she says.
“I was one of the editors to form part of the wholesale purge from the public media. I lost my job as editor of The Chronicle. I survived professionally by joining a privately-owned weekly, The Financial Gazette, on which I served as deputy editor in chief until my retirement a few years ago.”
At The Financial Gazette, she wrote columns under a pen name. Thinking she was a man, the ‘powers that be’ left her alone. That is until she was exposed as a woman for writing a piece questioning former South African President Thabo Mbeki’s ‘quiet diplomacy’ approach to the Zimbabwean crisis.
“I accused Mbeki of colluding with the Zimbabwean authorities and prolonging the suffering of the masses. A senior official in the information ministry crudely attacked me, saying I expressed those views because I was menopausal and was pursuing a regime change agenda at the behest of foreign powers.”
Even her attempts as editor to stand up for women in the newsroom were shot down. “Being the only woman among 15 male editors and managers was very lonely and frustrating. I was a victim of this gender discrimination myself. The moral here is that female trailblazers can rarely single-handedly move the immovable,” she says.
However, throughout her career she mentored other women. “I have encouraged them to do exceptional work despite being denied the chance to tackle meaty assignments and travel abroad on duty…
“The best defence against gender prejudice is proficiency and hard work, which will eventually be noticed and appreciated by someone.”
She encourages women to network with each other, “even if it has to be done under the radar”.
Her own family life suffered due to her dedication to her career, she says. “Being an editor with unconventional and unpredictable hours meant I could never be a proper traditional wife. This caused problems and I largely brought up my two daughters single-handedly.”
Her daughters, both adults now, are proud of her but as children “it was upsetting and destabilising for them to read about the attacks I was subjected to,” says Machirori.
Her youngest daughter, Fungai Machirori, is now a respected journalist herself. “They grew up around newsrooms. They knew how newspapers were produced and were fascinated.”
Fungai Machirori wrote about her mother: “Having already fought against many of the gender stereotypes that come with being a female journalist, my mother made it much easier for us kids to forge our way through this thorny field.”
While blazing the trail has been tough, Machirori has no regrets. “What I went through helped to make me who I am.”
This story was first published in the August 2014 issue of The Media magazine.