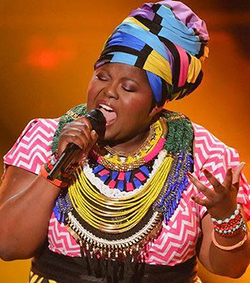 AFTER making a name for herself with her powerful voice in the most recent series of Australia’s The Voice, Thando Sikwila is busily working on her debut EP.
The former-Canberran will next month head into the studio to create an album she says represents exactly who she is.
“Going on The Voice really put things into perspective for me. I really found the thing I wanted to do and the things I’m good at and I want to make sure that’s what I’m giving to people,” she said.
“I didn’t get the chance to show who I was as an artist on the show – singing other people’s songs in the show is all very well but you need to be able to show other people what you can create.”
On the reality TV show, she wowed Kylie Minogue who chose Thando on her team, before being saved by Ricky Martin and joining his team and leaving the competition in the sing-off round, narrowly missing the live final.
Thando Sikwila sings Sex On Fire