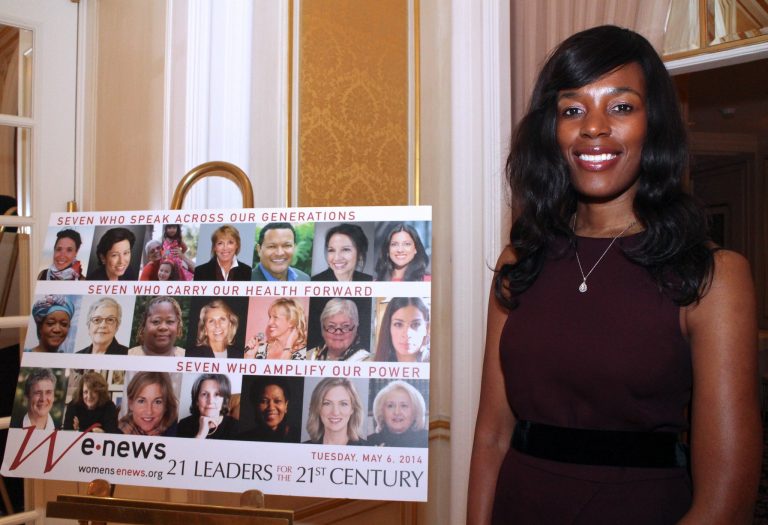 KNOXVILLE, Tennessee — Elizabeth Nyamayaro, “the mastermind behind [the]HeForShe [movement],” shares her inspiring story in her memoir “I Am a Girl from Africa”.

She describes how she rose out of poverty, then uplifted others to create a more equitable world. She is known as the brains behind this “United Nations global solidarity movement for gender equality” because of her vision to involve men in the conversation on gender equality.

At a Harper’s Bazaar event celebrating International Women’s Day, she expresses her belief that “if men are the problem, they have to be part of the solution.”

The Early Beginnings of Elizabeth Nyamayaro

Nyamayaro grew up in the small Zimbabwean village of Goromonzi with her grandmother. She describes living off the land with copious amounts of food until a drought left the village with no food or water when she was 8 years old.

She nearly died from starvation and dehydration when an African woman in a “blue uniform” appeared and gave her porridge. Had it not been for the woman who worked for the United Nations World Food Programme (WFP), Nyamayaro would not be alive today to tell her story and empower women and those living in poverty.

When a second drought hit her village, Nyamayaro’s grandmother sent her to live with her mother, and later, her aunt and uncle in Harare, the capital of Zimbabwe, where she went to school for the first time, learning English. She assisted her aunt in treating HIV/AIDS patients who could not afford or access treatment due to poverty.

Elizabeth’s aunt and uncle inspired her to help the people in her community with the philosophy of Ubuntu — “when we uplift others we in turn uplift ourselves.”

The Birth of the HeForShe Movement

With a little more than $300, 25-year-old Nyamayaro landed in London with the dream of working for the United Nations and helping other Africans, like the woman who saved her. Obtaining a job at the U.N. proved no easy task for Nyamayaro, but she eventually landed an unpaid research assistantship educating and caring for people with HIV/AIDS in Africa.

She realised how little say women had on the testing, treatment and prevention of HIV/AIDS. Nyamayaro saw the devastation the disease caused in a community rooted in patriarchal ideas, which left women lacking access to treatment. She appealed to the men to let their wives distribute life-saving medication to other women in the communities.

As she continued her humanitarian efforts, she saw “a gender dimension to… all of the inequalities in the world.” Nyamayaro noticed how often men make the decisions at home, in their communities and in positions of power.

She believes that more women in decision-making positions will positively impact women and society because a more equitable world creates more equity for everyone.

Her passion for helping other Africans propelled her to finish her master’s degree in political science, eventually becoming “Senior Advisor to Phumzile Mlambo-Ngcuka, the Under-Secretary-General and Executive Director of U.N. Women.”

Including Men in the Gender Equality Conversation

Her idea to include men in gender equality conversations through the HeForShe movement emerged out of a “personal conviction that as long as the pursuit of gender equality remains a struggle between women and men, no one wins.” By bringing men into the equation to help solve gender inequality, Nyamayaro saw a solution to long-standing barriers to achieving gender parity,

The HeForShe movement is touted as an extremely successful social media campaign as evidenced by the 2 billion conversations every year as well as the 600 million global citizens who are part of the movement.

The Woman in the Blue Uniform

Since making these positive contributions to the issue of gender equality, Nyamayaro is now finally fulfilling her dream as the woman in the blue uniform, working as a special adviser of the WFP. She filled the role in June 2021 with the interest of “reach[ing]every child and family in need,” particularly in Africa.

Nyamayaro also hosts a podcast for the WFP called, “Better Food, Better World”, where she discusses the extent of the global hunger issue. She asserts that “malnutrition remains the leading cause of death and illness globally.”

Much like her response to gender equality, Elizabeth Nyamayaro views alleviating global hunger as everyone’s responsibility because every person is connected. Her tragic story of hardship and famine has solidified her determination to advocate change and lessen the burden of inequality and malnourishment in developing countries.