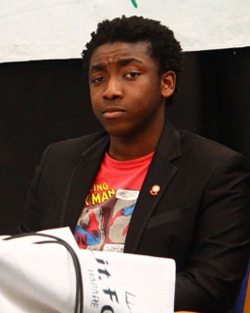 *This artile is taken from http://hyperallergic.com
OVER the past few years, the Zimbabwean comic industry has grown significantly. In 2015, an artist collective called Comexposed launched Zimbabwe’s first-ever comic book convention. According to TechZim, it “highlighted the animation talent in the country and shed some light on the burgeoning local comic industry.” Since then, Comexposed has held multiple comic book events. Speaking at Comexposed 2016, co-founder Eugene Mapondera said that the event showed how the local comic industry has grown rapidly since the event’s inception.
Most of the international comic community hasn’t yet recognized the cultural and political importance of the Zimbabwean comic scene. Despite this, Zimbabwe — which has been described as a “great comic book incubator” — continues to produce talented artists like Bill Masuku.
Masuku is fast becoming one of the most well-known comic artists in Zimbabwe. He, along with the well-known Zimbabwean graphic artist Dananayi Muwanigwa, created a popular character named Black Zeus. Masuku went on to create the character Razor-Man, and that series, along with his other comics, are now being produced by Enigma Comix Africa, a subsidiary of Sigma-Digital Studios.
Razor-Man debuted and then sold out at Comexposed’s Comic Book Day in 2016. Masuku is currently working on the fifth comic in the Razor-Man series as well as a superhero comic called Arcadia Knights. He’s also collaborating with Amanda Chaniwa on Drama Mama, a slice-of-life comic about five women experiencing life after high school.Advertisement