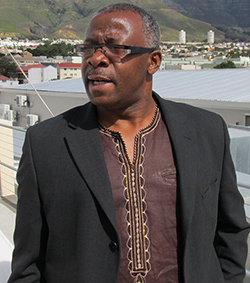 ZIMBABWE’S renowned theatre guru, Daves Guzha, broke a new ground by taking live theatre performances to inmates around the country’s prisons as part of Rooftop Promotions social responsibility programmes and to show that theatre is a noble interaction tool.
The development, according to Guzha, will also help prisoners to turn difficult past circumstances into creative benefits for the future.
Plays that have so far been staged at Harare Central and Chikurubi Female prisons include Juju Soccer and The Past is For the Future, both penned by Zimbabwe’s most prolific and respected playwright Stephen Chifunyise.
The next performances will be at Banket, Bindura, Kadoma, Marondera, Hurungwe, Guruve and Mt Darwin prisons among others places.
At Harare Central Prison more than 1,000 male prisons could be seen jumping up and down, whistling as some liked the costumes that were worn by the two female actors, more than following the story lines.
Rooftop Promotions producer Daves Guzha said he also hopes to bring productions by inmates out of the cells to Theatre in The Park’s new venue to help in their rehabilitation process as well as nurture inmates’ artistic talents.
“Prisoners were once members of the society before they were inmates and performing in prisons is testament to the power of theatre to change lives and that theatre is a good socialisation tool,” he said.
At Chikurubi Female Prison, the inmates could easily follow The Past is For the Future story line and theme which talks about baby dumping featuring veteran actress Eunice Tava and Lisa Gutu.
The play talks about determination and love, putting across the message that one can create from a tragic past for a positive future they prefer; leave the past to the past and struggle for a positive future always.
Stephen Chifunyise says this play (The Past is For the Future) has so many messages.
“It does not help to remain tied to a negative past when it is possible to turn one’s talent to generate a positive future from a sad past,” he said.
On Juju Soccer, he (Chifunyise) brings to the fore the touchy and contentious subject of the perceived use of juju and superstition which has been an emotive subject in the beautiful game of football the world over.Advertisement

The cast of this well received play is made of a compendium of the who-is-who of local theatre in the mould of Daves Guzha director and producer, multi-award winner Mandla Moyo whose theatrical exploits have seen him perform in almost every continent.
The tried and tested horses are joined by one youngish actor who is a gem and award winner in Teddy Mangawa.
The casting is very deliberate as it brings a diverse team reflective of the status quo in the theatre sector.