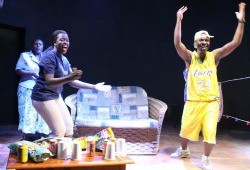 VETERAN actress Eunice Tava (real name Chiratidzochedenga Eunice Chikoore) surprised theatre gurus with her debut production ‘Mother Don’t Cry’, a stage play which she produced and directed.
Written by renowned Stephen Chifunyise, the play highlights challenges of cancer patients and their dear ones.
It premiered at Old Mutual Alliance Francaise Wednesday night to a full house.
Tava’s journey started 15 years ago when she made her debut appearance on stage at Rooftop Promotions’ Theatre in The Park as a character in the play Ganyau express under the tutelage of gurus Daves Guzha and Walter Muparutsa.
She rose from being a high school actress to national star, winning several awards in the process.
She has been an Assistant Director/Producer under Guzha and together they produced and directed the well-received productions, The Past is For The Future and Taking a Spirit Home.
Coming to the stage play ‘Mother Don’t Cry’, the veteran actress was given the script to produce and direct and did not disappoint her master, Guzha.
The well-choreographed and emotionally captivating but humorous play, features award winning actor Teddy Mangawa, Lloyd Nyakadzino and Judith Tsoka and herself (Eunice). She, again, plays two roles.
In the play, a woman, played by Judith Tsoka, lost her husband in a road accident and has been struggling with breast cancer.
She has found it difficult to tell her relations and her children -a daughter and neighbor-double casted (Eunice Tava) and a son Llyod Nyikadzino-that she has breast cancer.
The woman has a lover (Teddy Mangawa) whom she has introduced to her children as a ‘Muzukuru’ and who has become a strong pillar of support.
Children get to know that the so-called Muzukuru is in fact a lover who has become an essential part of their mum’s survival and that all her trips to South Africa were not just for business as a cross boarder shopper but mainly to undergo extensive examination and treatment for breast cancer.
She informs her children that the disease is so advanced that she must undergo an operation to have both breasts removed.
The children are shocked. They ask themselves many questions.
Why has God allowed their mother who is a preacher, a church elder and servant of God to be attacked by cancer? Why did she not inform them? Isn’t this a clear indication that their mother will die?Advertisement

The children cannot handle the fact the Muzukuru is a man who can become the head of the family. The son, who thinks of himself as the head of the family after the mother at the kurova guva (appeasing the spirit) inheritance ritual chose him as her husband, cannot accept the presence of the Muzukuru.
Guzha said he never attended the rehearsals nor did he give any advice to the producer (Eunice) but the outcome of the play is incredible.
“This is a show that will be remembered by many thespians and motivate many in the industry to aspire to get to great heights, having seen Eunice from being a no body to the present day.
“In short, I can say Eunice you have surprised me and all I can say is you have arrived in the creative industry.”
Priscilla Mangwiro from Cancer Association of Zimbabwe said she was impressed with how Eunice and her team touched and portrayed on issues of breast cancer which is no longer a silent but a leading killer among women.
“This is the first and the best staged play highlighting cancer issues in Zimbabwe and it has managed to address some of the myths and misconceptions,” said Mangwiro.
“The producer/director Tava’s production provided the correct information about cancer, its treatment, the importance of early diagnosis and self-examination.
“And the fact that men can also suffer from breast cancer which the neighbor finds hard to believe.
“And managed to put out how her children and lover accept her condition and together they plan to provide the essential support necessary for her to survive the cancer.”
Chifunyise said the production was beyond his expectations.
Under Rooftop Promotions, the multi-talented Eunice has toured countries such as Norway, Denmark, Britain, Scotland and several African countries performing on stage.