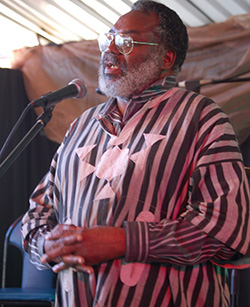 AFTER taking close to two years focussing on the re-establishment of its flagship theatre venue Theatre in the Park now turns its attention to the creative side of things.
A curtain raiser production – Juju Soccer – is set to premiere on the 18th of November at Alliance Francaise as part of preparations for the opening of the new theatre in the park venue which is set to open its doors to the public before the end of the year.
The hilarious Juju Soccer play was written by Stephen Chifunyise and tackles a controversial subject in the ‘beautiful’ game of football.
Rooftop Promotion Producer and Director of the play Daves Guzha said the absence of productions has impacted on the brand visibility of Theatre in the Park.
He said as they look to reclaim their pole position in the sector within Zimbabwe and beyond, it has become critical that the production side of things is upped.
“Juju Soccer, therefore, becomes the official production for Rooftop Promotions and this means, as the New Year beckons, this production becomes the one we will be pushing to various stages throughout the world as well as key festivals,” said Guzha.
In the play, the writer, Steven Chifunyise explores whether juju exists in football.
He brings to the fore the touchy and contentious subject of the perceived usage of juju and superstition which has been an emotive subject in football the world over.
But as the play progresses, the field play becomes Zimbabwe and the subject the current state of affairs in the country.
The writer now shift his focus on challenges that are being faced by Zimbabweans as they seek solutions from different directions including juju and divine intervention.
The satire is seen more when a n’anga comes into play and offers solutions to the soccer team but there is conflict of interest between him and the beliefs of the soccer coach who is religious.
The cast of this highly anticipated play is made of a compendium of the who-is-who of local theatre with Guzha, who has a habit of making rare theatrical appearances once in every 3 years and has been plying his trade for the last 29 years as actor, coming in as director and producer.
The play also features multi-award winner Mandla Moyo, whose theatrical exploits have seen him perform on almost every continent and has worked with some of the best directors in the world.Advertisement

These two relative oldish and tried horses are joined by one youngish actor and award winner Teddy Mangawa whose star continues to soar.
The casting is very deliberate as it brings a diverse team reflective of the status quo in the theatre sector.